All study methods were approved by Institutional Review Board and Ethics Committee of Hubei Maternal and Child Health Hospital [(2020) IEC (lw047)]. The patient reported in this study gave written inform consent to participate.

A 17-year-old woman came to our hospital for dysmenorrhea in 18 April 2012. She was unmarried but had sexual life. Her menarche occurred in December 2010. She had menstruation once every 25–30 days and each menstruation lasted for 5 days, but menstrual volume was small and dysmenorrhea [VAS (visual analogue scales): 6 marks] was severe during menstrual onset. In February 2011, she received the removal of hematosalpinx and the right salpingostomy due to the right lower abdominal pain combined with pelvic mass in another hospital (the specific condition is not clear) after the third menstrual onset. After operation, her dysmenorrhea failed to be relieved and was aggravated (VAS: 8 marks), so she came to our hospital. In our hospital, she said that she had no sexual life for nearly six months. Type-B ultrasonic instrument suggested possible duplex uterus, blood accumulation in the right uterine cavity and a cystic mass in the right appendage area (suspected chocolate cyst). The patient was referred to our hospital on 16 May 2012.

Physical examination on admission: There was a 10-cm surgical scar in the middle of her lower abdomen.

Gynecological examination: Vulva was married and non-productive. Vagina was patent. She had a smooth cervix without lifting pain. Her uterus was anteflexed and widened with a size similar to a male fist. Her uterus was mobilizable and had marked tenderness. Bilateral appendages were not palpable.

Auxiliary examinations: Cancer antigen 125 (CA-125): 102 U/mL (normal range 35.0). On 14 May 2012 when she was just in her menstrual period, type-B ultrasonic instrument indicated that there were echoes of two uteruses in the right and left sides respectively, the volume of the left uterus was 5.0 cm 3.6 cm 2.3 cm with a endometrial thickness of 0.63 cm, the volume of the right uterus was 6.0 cm 5.9 cm 4.7 cm. The anteroposterior diameter of the right uterine cavity was 1.7 cm with a liquid anechoic area of 2.0 cm 2.5 cm 1.2 cm. There was no continuous echo between the right uterine inferior segment and cervical canal, and there was only a cervical echo in the cervical section. In the right appendage area, there was a cystic mass which was likely to be chocolate cyst. Both kidneys, bladder and ureters were normal. On 18 May 2012, hysteroscopy displayed single cervix, narrow uterine cavity and the left oviduct opening, which was in consistent with unicornuate uterus (Fig. 1).

Based on above examinations, the preliminary diagnoses were uterine malformation (rudimentary horn of uterus? Bicornuate uterus? Or Robert’s uterus?). For definite diagnosis and further treatment, the patient underwent hysteroscopy combined with laparoscopy on 23 May 2012. The laparoscopy showed that the greater omentum widely adhered to the anterior abdominal wall. When the adhesion was separated, a lot of chocolate-like fluid flowed out (Fig. 2). After separating the adhesions, the uterus was clearly seen. The uterus widened and seemed to contain two uterine bodies, but the uterine fundus was continuous. The left uterine body was normal in size, but the right one obviously enlarged (Fig. 3). The right ovary was 4 cm 4 cm 3 cm in size and contained chocolate-like liquid. The right fallopian tube revealed marked thickening and was like purple and blue sausage with a blind end which extensively adhered to the greater omentum. The uterine right posterior wall adhered to the right pelvic wall. The above findings were in consistent with the right ovarian chocolate cyst and pelvic endometriosis. After separating all adhesions, salpingostomy was performed on the right fallopian, and then a lots of chocolate-like liquid flowed out. The capsule wall of the right ovarian chocolate cyst was removed and was sent for pathological examination. One week later, the pathological examination indicated pelvic and ovarian endometriosis. 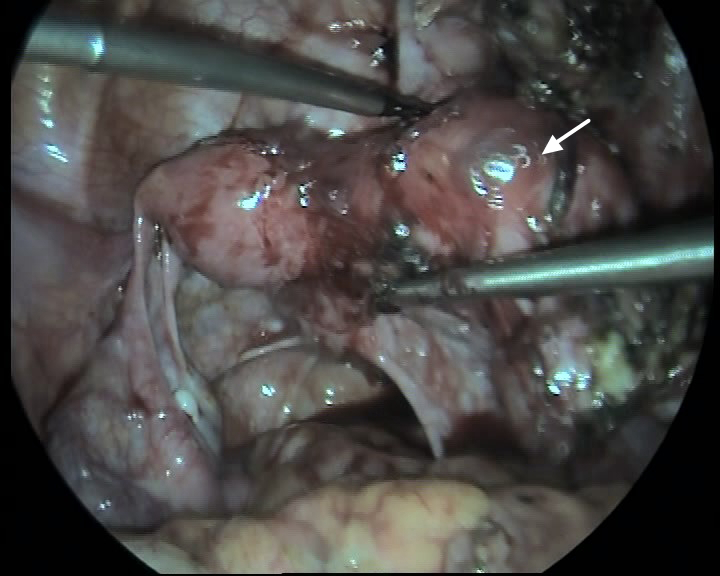 Under laparoscope, methylene blue solution was injected into the right uterine cavity for guiding hysteroscope operation. After finding the oblique septum, the weak part of the oblique septum was cut using the hysteroscope monopole electrode needle, and then the methylene blue solution combined with coffee solution and brown tissue pieces flowed out. Under the guidance of type-B ultrasonic instrument, the oblique septum was completely removed. The right uterine cavity and the right oviduct opening were clearly visible, and the whole uterus returned to a shape of inverted triangle.

An intrauterine device was used to prevent uterine cavity adhesion one week after operation, and was removed 3 months after operation. At the same time, the patient took 4 mg of progynova once a day for 21 days, and took 20 mg of dydrogesterone after 11 days after operation for 10 days with a total of 3 cycles to avoid intrauterine adhesion.

The patient again received hysteroscopy 6 months after operation, and the morphology of uterine cavity was basically normal. In February 2017, the patient smoothly gave a full-term baby boy with a body weight of 3445 g by vaginal delivery.

Some scholars have summarized the characteristics of Robert’s uterus as follows: (1) primary dysmenorrhea; (2) different uterine appearances between laparoscopy and uterophotography; (3) no urinary system malformation [5]. In this study, the patient had primary dysmenorrhea. Type-B ultrasonic instrument indicated two uteruses, right pyometra and normal urology. The hysteroscopy displayed single cervix and the left oviduct opening; and after cutting open the oblique septum, hematocele in the right uterus was seen. The laparoscopy showed that the uterus widened and seemed to contain two uterine bodies, but the uterine fundus was continuous. Based on above findings, the patient was diagnosed with Robert’s uterus. In this patient, the accumulated blood in the right uterine cavity flowed out through the right fallopian tube into the right pelvic cavity, which led to right ovarian endometriosis cyst and increased CA-125 (102 U/mL).

The clinical manifestation of Robert’s uterus is very similar to rudimentary horn of uterus, so it is necessary to pay attention to their differential diagnoses. Before operation, it is difficult to definitely diagnose Robert’s uterus by two-dimensional ultrasound, three-dimensional ultrasound, hysterosalpingography, MRI, or even laparoscopy or hysteroscopy alone. Hysteroscopy combined with laparoscopy is the golden standard for the diagnosis and treatment of Robert’s uterus. If necessary, hysteroscopy and laparoscopy combined with B-ultrasound monitoring are used for the patients with atresic and narrow uterine cavity. In this patient, under laparoscope the outside shape of her uterus was normal; and the methylene blue solution was always not observed in the left uterine cavity after injecting methylene blue solution into the right uterine cavity, which suggested that there was no passage between the two uterine cavities. Therefore, the uterine malformation in this patient is consistent with the characteristics of Robert’s uterus; while in rudimentary horn of uterus and unicornuate uterus, their uterine fundus is separated.

Only surgery is effective for the treatment of Robert’s uterus. The traditional treatment for Robert’s uterus as the Strassmann’s metroplasty [6], is to open the uterus after laparotomy, remove the septum between the two uterine cavities, and then suture the two uterine bodies to make the two uterine cavities share the same cervix. Although laparotomy is a very effective method in the treatment of Robert’s uterus, it can cause damage to the uterine wall [7]. In the patient of this study, under the guidances of laparoscope and type-B ultrasonic instrument, the uterine oblique septum was removed using hysteroscope without damaging to myometrium, which reduced the risk of uterine rupture after pregnancy. With the development of ultrasonic diagnostic technology, ultrasonic monitoring can not only accurately measure the width and height of septum, but also guide accurate electroresection for removal of the septum [8].

According to postoperative thickness of septum and the degree of endometrial defect, Foley balloon or intrauterine device (IUD) should be placed in the uterine cavity, or estrogen-progesterone cycle treatment be used to assist endometrial repair and reduce intrauterine adhesion. It is recommended that the secondary hysteroscopy be performed after operation, and if there is residual septum, it should be resected [9]. For the patients with fertility requirements, pregnancy may be immediately carried out after endoscopic surgery, which shortens the time required by uterine wound repair after laparotomy [10].

Compared with the traditional laparotomy, hysteroscopy combined with laparoscopy can markedly relieve operation wound, and possesses some advantages such as minimally invasive, scar-free and fast postoperative recovery. Especially for the patients with fertility requirements, hysteroscopy combined with laparoscopy can retain the integrity of uterine muscle wall, which is beneficial to postoperative pregnancy.

Early and accurate diagnosis as well as appropriate surgical treatment are important for Robert’s uterus. Gynaecologists must be on guard against atypical obstructive Müllerian duct development malformation, and give close attention to the primary dysmenorrhea of the juvenile females in order to find uterine malformation early as much as possible [2].

During the operation, the injection of methylene blue solution into the atresic uterine cavity was used as a surgical guide to let we easily find out the septum. This is worth to be referred.

All study methods were approved by Institutional Review Board and Ethics Committee of Hubei Maternal and Child Health Hospital [(2020) IEC (lw047)]. The patient reported in this study gave written inform consent to participate.

This work was supported by the Open Research Fund Program of the State Key Laboratory of Virology of China (2021KF005).