In recent decades, labiaplasty has gained increasing worldwide awareness. The ever-growing request for this surgical procedure relates both to aesthetic and functional reasons. These include dissatisfaction with labia minora appearance, discomfort caused by labia minora hypertrophy (LH), asymmetrical enlargement, chronic irritation and complications from poor vulva hygiene [1,2]. Several case reports and studies regarding the labia minora hypertrophy have been published in the past few years, most of them are associated with the development of labiaplasty methods and techniques [3]. However, reports on labia minora abscess are still scarce. Here, we present a case report of patient who suffered from bilateral hypertrophy of labia minora with recurrent abscesses during seven years, which was successfully treated with labiaplasty.

A 31-year-old unmarried Chinese woman presented to our department with hypertrophy and recurrent abscess formation of labia minora as main complaints. Her medical history revealed a spinal cord trauma from a falling accident at 9 years old, rendering her paraplegic. The patient had no other comorbidities but relied on a wheelchair and daily use of diapers due to high paraplegia and urinary incontinence. The patient reported having noticed labia minora swollen seven years prior to the consultation. At the time of diagnosis, the patient presented with clinically noticeable bilateral labia minora hypertrophy with local abscess. After using antibiotic ointment (Mupirocin, three times per day) with her mother’s assistance, the local perineum condition was temporarily improved. However, the patient reported increasing recurrence of labia minora inflammation and abscess formation with time, severely affecting her quality of life. Physical examination revealed stage III bilateral symmetric hypertrophy, with 5 cm width from the bottom to the free edge, a projection of 3 cm beyond labia majora (measured without overstretch), according to the classification system described by Motakef [4]; scattered cysts were found on both sides of the labia minora, the largest one located on the edge of left labia minora about 1.5 1.5 cm in dimensions; no rash or ulceration occurred on perineum skin (Fig. 1). Preoperative examinations revealed no significant contraindication. 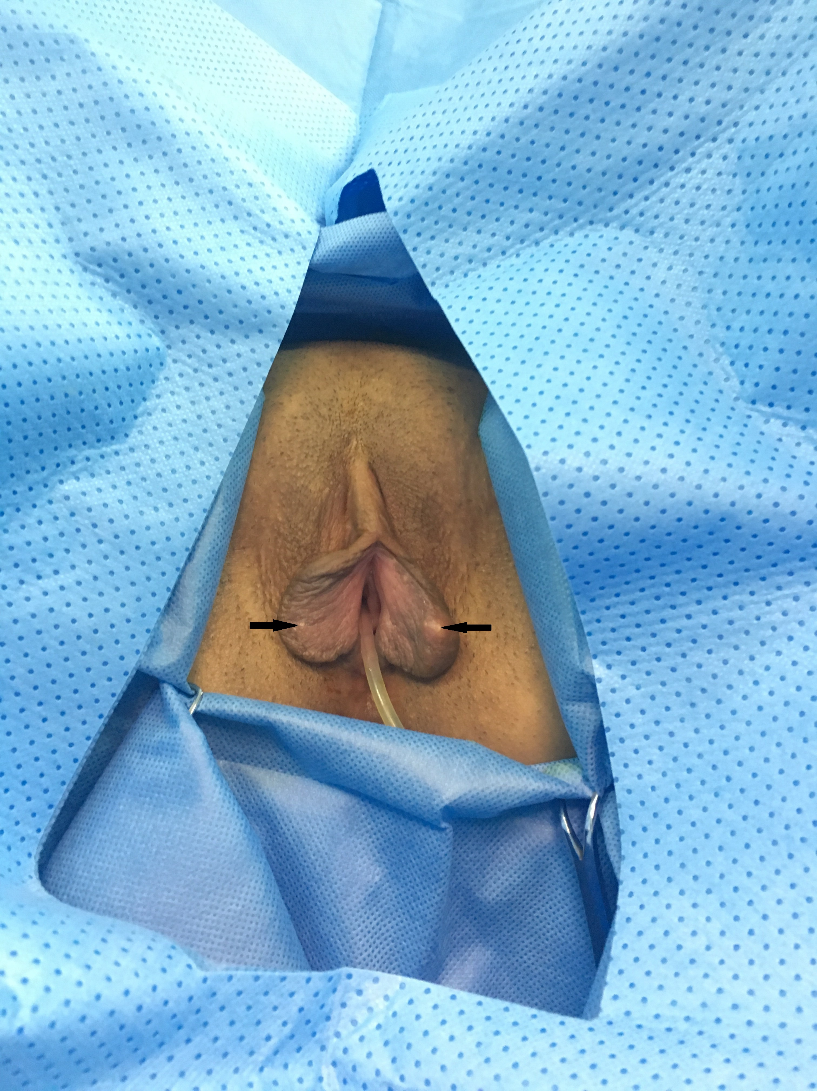 After a full discussion of the benefits and risks of the surgical correction, potential complications, and possibility of recurrence, the patient agreed to the surgical management, having signed a written consent form. Given the location of the abscesses, close to the rim of labia minora, complete abscess removal by edge resections efficiently avoids recurrence. Moreover, incisions from edge resections are exposed to the outside, which is key to prevent wound infection from urinary incontinence. Consequently, edge resections of both labia minora hypertrophic sides were performed in the lithotomy position under local anesthesia, ensuring complete cyst excision and symmetry maintenance (Fig. 2). On incision of the excised labia minora cysts, purulent content was evacuated. 6-0 self-absorbing sutures were used subcutaneously, and the incisions were sutured with 5-0 fast-absorbing sutures after meticulous hemostasis (Fig. 3). Given the patient’s urinary incontinence, urethral catheterization was performed before operation. The catheter was retained for 5 days’ post-operation to keep the perineum region dry and prevent urine contamination of the incisions. Antibiotic prophylaxis (Cephradine, four times per day) was administrated for 5 days. Additionally, twice a day perineal care helped to minimize the infection and promoted wound healing. The patient had stitches removed in good condition on postoperative day 7 and was then discharged for home care, with no signs of inflammation and hematoma except mild edema in the operated area. Post-discharge homecare included maintaining the wound dry and clean and perineum cleanse 3 days after stitch removal. A 6-month post-surgery telephone follow-up revealed full recovery without hematoma, wound dehiscence, or infection. The patient further reported being satisfied with functional and cosmetic results. Surgical markings on both inner (A) and lateral (B) sides of labia minora before operation, which ensure complete excision of cysts and symmetrical maintenance. Edge resections of both hypertrophic sides of labia minora. The immediate postoperative view shows the symmetry of the remaining labial tissue (A) and the excised tissue from labia minora (B).

The reduction of labia minora by labiaplasty has become a routine procedure in western countries. However, in traditional Chinese culture, female genital plastic surgery is still not widely accepted among women. The main motivations for demanding labia minora plastic surgery are aesthetic dissatisfaction and the discomfort caused by labial hypertrophy. Beyond aesthetic and functional reasons, patients seek labiaplasty due to psychological complaints, such as depression or low self-confidence [5]. To date, there have been few reports about hypertrophy of labia minora with recurrent abscesses, with the majority of research focusing on the development of surgical methodologies in plastic surgery. The case-report described here, draws attention to the causes, management, the relation between LH and labial abscesses, and treatment recommendations.

LH is currently believed as a congenital disorder, related to androgen and estrogen functions at embryonic stage [6,7]. Still, evidence shows that environmental factors, such as mechanical stimulation and topical inflammation, may also lead to LH development. It has been further described that LH is associated with other diseases, such as myelodysplasia [8], lymphedema [9], Crohn’s disease, Laron syndrome [10], endometriosis and vulvar varicosities [11].

In the case-report described here, the patient suffered from paraplegia since she was 9 years old. Long-term sitting in a wheelchair resulted in continuous compression and friction of the perineum, which was likely the cause of the observed anatomical changes. Moreover, the patient used diapers on a daily basis due to urinary incontinence, which created an airtight and moist perineum environment. All these factors might have led to the observed skin lesions, dermatitis, secondary infection, and enlargement of the labia minora. Overall, we reasoned that mechanical irritation was among the main etiologic factors for labia minora hypertrophy. Labia minora is rich in sebaceous and sweat glands, which open onto the skin directly. Accordingly, the pathological features of LH, demonstrated in a case series, include hyperplasia and dilatation of sebaceous glands, papillomatosis, lymphangiosis and increased fibrous stroma [12,13]. Therefore, we speculate that there is a close relationship between LH and labial sebaceous cysts, as hypertrophic labia minora is prone to develop sebaceous gland cysts. In cases of LH with friction damage, the development of secondary infection and abscess is common, which might explain why our patient had recurrent abscesses over time. Unfortunately, labia minora enlargement and inflammatory reaction are more likely to be overlooked in the paraplegic females due to weakened sensation of the perineum.

Barrett et al. reported the clinical and pathological features of LH, indicating lichenification, sebaceous hyperplasia, chronic inflammation and signs of lymphedema. The authors concluded that LH was not only an anatomic variant but also chronic lymphedema, which could lead to elephantiasis, functional impairment, recurrent infections and, rarely, malignancy. Based on their findings, the authors suggested that early treatment could prevent the occurrence of malignant conditions [9].

We present a case in which redundant labial tissue and cysts were excised completely. Furthermore, 6-month phone follow-up revealed a satisfactory result of surgical treatment without obvious complication. Still, we support that longer follow-up is still needed to understand the long-term implications of the procedure. As mentioned above, hypertrophic labia may be more prone to sebaceous cysts and secondary infections due to hyperplasia of sebaceous glands, which might occur more often in patients with labial abscess history, as the patient reported here. Although conservative treatment might provide temporary relief, surgical intervention is, so far, the sole effective treatment. Therefore, we suggest that early diagnosis and surgical procedure are imperative for patients who present with poor quality of life due to LH and repeated labial abscesses.

Hypertrophy of labia minora with recurrent abscesses is rare, likely with higher frequency in the population with paraplegia. We advocate that early diagnosis and surgical approach to treat such patients with LH accompanied by labial abscesses.

YZ, YR, and BD performed the operation and designed the study; YZ, DW and HX collected the data; YZ, YR, BD analyzed and interpreted the patient data regarding the treatment; YZ and YR were major contributors in writing the manuscript; YR and BD revised and edited the manuscript. All authors read and approved the final manuscript.

The study protocols were approved by the Ethical Committee of the Maternal and Child Health Hospital of Hubei Province [2020] IEC (LW046). Written consent to participate was obtained from the patient in this study.

The authors thank all the operating room nurses and anesthesiologists who participated in this study. Yongle Ruan is currently receiving a grant (#2017M620339) from Postdoctoral Science Foundation of China.

This research was funded by Postdoctoral Science Foundation of China, grant number 2017M620339.