Disseminated intravascular coagulation (DIC) is induced by several clinical conditions such as infectious diseases and malignant diseases which account for about 2/3 of DIC. Obstetric events and trauma are also the main causes of DIC [1]. But DIC rarely occurs in patients with benign gynecologic diseases. Adenomyosis is a chronic estrogen-dependent gynecological disease characterized by the presence of endometrial glands and stroma outside the uterine cavity [2]. In the present article, we reported a rare case of acute DIC after suction curettage due to unwanted early pregnancy in an adenomyosis patient. Although hysterectomy has been advised for women with severe symptoms from adenomyosis and also be a positive and effective treatment for acute DIC, there are still many patients with fertility requirements who have a strong desire of preservation of uterus. Approximately 20% of cases of adenomyosis involve women younger than 40 years [3,4]. In the meantime, women are getting married later [5]. More and more patients with adenomyosis need to preserve their uteruses. In the present case, we provided a possibility that anticoagulant treatment could be considered as one option before considering of hysterectomy in such patients. The study was approved by Ethics Committee of Women’s hospital, School of Medicine, Zhejiang University (Approval No.: IRB-20200220-R).

The adenomyosis patient (37-year-old, gravidity 4, parity 2) came to the emergency department of our hospital for severe abdominal pain and vaginal bleeding on October 19, 2018. The patient had suffered from adenomyosis for 5 years, but was not treated yet. Her menstrual flow and dysmenorrhea were tolerated. On October 15, 2018, she underwent suction curettage to terminate unwanted early pregnancy (8 weeks of pregnancy) in outpatient operation room of our hospital. There weren’t any drugs used during the suction curettage. But as a cervical preparation, 200 g sublingual misoprostol had been taken by the patient 30 minutes before operation. The operation was successful. Approximately 10 mL blood was lost at the time of the suction curettage. The patient left the hospital after observation for 1 hour and there was little vaginal bleeding on the day of surgery. In addition to taking cefuroxime sodium 0.25 twice a day, no other drugs were taken after the operation. Then on the second day after operation, vaginal bleeding increased and abdominal pain intensified gradually. On the fourth day after operation, abdominal pain was unbearable and the patient came to our hospital for emergency treatment.

In 2014 and 2016, she underwent cesarean sections. She had no medication history or family history associated with thrombotic diseases, and had not experienced any symptoms of bleeding tendencies.

At the time of consultation, the blood pressure and heart rate of the patient were in normal range. The body temperature was 37.9 C. Physical examination showed pale skin and palpebral conjunctiva which indicated anemia. Pelvic examination revealed the uterus was as large as 3 months of gestation. And the uterus tenderness was obvious.

We reviewed the preoperative laboratory test results of the patient and found no abnormalities in blood routine, coagulation function and serum biochemical tests.

According to the diagnostic criteria of the ISTH (International Society on Thrombosis and Haemostasis) guidance [6] and the consensus of Chinese experts [7], DIC was diagnosed. Treatments including infusion of Tienam (Imipenem and Cilastatin sodium), transfusion of fresh frozen plasma, subcutaneous injection of nadroparin calcium were taken (Since the weight of the patient was 60 kilograms, the administered nadroparin calcium dose was 4100 IU every 12 hours for 3 days).

Meanwhile, abdominal CT and vascular ultrasound of extremities were performed. No obvious thromboses were found. However, CT showed an irregular low-density lesion with a range of 6.5 6.4 6.8 cm in the muscular layer of the posterior wall of the uterus. The finding suggested that the lesion of the posterior wall was necrotic cyst (Fig. 1). 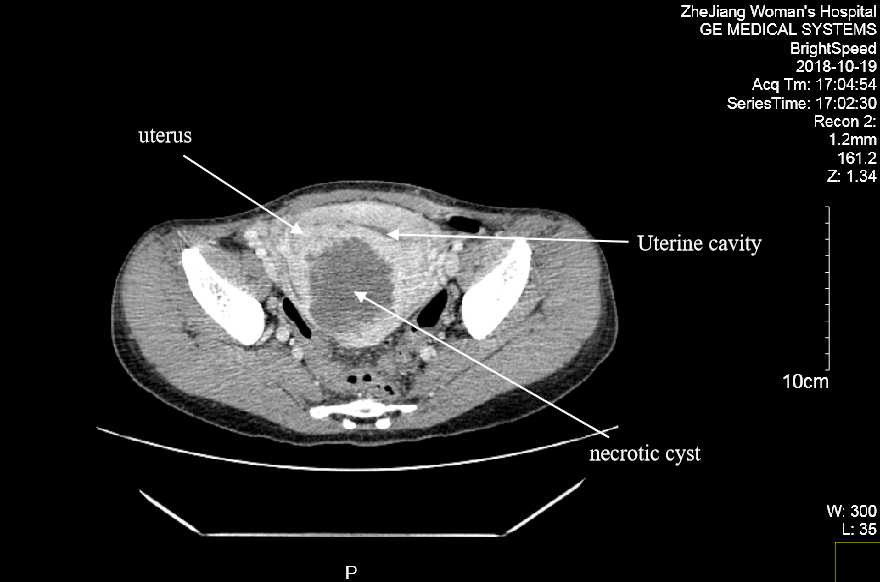 Although the patient’s temperature was slightly high, according to the result of PCT, bacterial infection was excluded. There were no manifestations and evidences of malignant tumor, trauma or abnormal liver function. And in the light of common thrombosis area and symptoms of the patient, abdominal CT and vascular ultrasound of extremities were performed to detect mesenteric thrombosis and arteriovenous thrombosis of extremities. Based on a series of examinations and laboratory test results, the common causes of DIC were excluded. We considered that the cause of DIC in this patient was related to adenomyosis.

Disseminated intravascular coagulation (DIC) is not an independent disease, but the ultimate common pathway of coagulation dysfunctions in many diseases. It is a clinicopathological syndrome. For the blood coagulation mechanism is diffusely activated, it promotes extensive fibrinogen deposition in small vessels, which leads to the damage of tissues and organs. On the other hand, the consumption of coagulation factors leads to the tendency of systemic hemorrhage. The two contradictions exist simultaneously in the development of DIC disease and constitute a specific clinical manifestation. Multiple organ dysfunction syndromes are the leading cause of death in patients with DIC. The basic diseases that can induce DIC include: systemic infection/severe infection, trauma, organ damage, malignant tumors, obstetric events, liver failure, etc. [8].

For patients after termination of pregnancy, sepsis caused by incomplete abortion is an important inducing factor of DIC. However, in the present case, transvaginal ultrasound founding ruled out the possibility of retained products of conception, PCT examination result ruled out bacterial infection. So in the present case, common causes of DIC, like serious infections, tumors, organ damage and liver failure, have been excluded based on a series of examinations and laboratory test results. The cause of DIC was considered relating to hemorrhage and necrosis of adenomyosis lesion after suction curettage.

Adenomyosis is a diffuse or localized lesion in which endometrial glands and stroma invade the myometrium of the uterus, presenting as hypermenorrhea and progressive dysmenorrhea [9]. It is commonly seen in women of reproductive age (especially in women from 25 to 45 years old). Only 7 reports (Contain 7 patients) of DIC associated with adenomyosis have been reported through our search for literatures in PubMed and Embase [10-16] (Table 2).

In above, 5 cases [10-13,15] were menstruation-related. The other 2 cases [14,16] were developed after dilation and curettage due to abortion. In the two cases, one patient with missed abortion underwent hysterectomy, the rest one in which the uterus was preserved was early pregnancy and similar to the present one we reported.

A typical sequence of intravascular coagulation and fibrinolysis includes the following: procoagulant exposure (such as tissue factor, TF), coagulation, fibrinolysis, end organ damage. Studies have shown that adenomyosis affects both the coagulation and fibrinolysis systems and the volume of adenomyotic tissue may be associated with variations in the coagulation and fibrinolysis systems [17]. And tissue factors (TF) are highly expressed in adenomyosis [18]. Since TF is a procoagulant factor. We speculated that the following was the mechanism of the occurrence of DIC in this patient. A decrease in progesterone after abortion led to bleeding and necrosis in the adenomyosis lesions. Necrotic tissue of adenomyosis released a large number of TFs into the blood, which activated the exogenous coagulation system-microthrombosis. Blood was immersed in the muscular layer of the uterus which resulted in the separation, breakage and even degeneration of the muscle fibers, meanwhile, caused subsequent fibrin formation and microthrombi inside adenomyosis tissues. Fibrin deposited on endothelial cells lining the walls of blood vessels and promoted infarct formation and thrombosis in peripheral vessels [17]. Microthrombi that formed inside adenomyotic tissues lead to subsequent activation of the fibrinolysis system.

DIC is a dynamic process of ongoing thrombin generation and fibrinolysis. It can present as an acute, life-threatening condition or a chronic, subclinical process, depending on the degree and tempo of the process and the contribution of morbidities from the underlying cause. And a major principle in the management of DIC is treatment of the underlying cause in order to eliminate the stimulus for ongoing coagulation and thrombosis. As the menstrual related acute DIC case reported by Nakamura et al. [10], the underlying cause was adenomyosis, but the stimulus was menstruation. For the patient did not enter the stage of severe hyperfibrinolysis and terminal organ damage, when the stimulus was eliminated, surgical removal of the uterus was not required as anticoagulation therapy and supplementation of coagulation factors improved the condition. The present case showed an acute (decompensated) DIC. The primary disease of the present case was adenomyosis. But the causative factor of it was induced abortion. The patient developed DIC after abortion. However, due to the timely recognization and effective treatment, the DIC process was controlled. The process of intramuscular hemorrhage and thrombosis caused by abortion was stopped. So there was no need to perform hysterectomy temporarily. The case report published by Fuminori Kimura et al. [16] also supported this perspective. However, closely follow-up was still needed by the patient, and more cases should be reported to support the conclusion that uterus can be saved in such DIC condition, and to work out suitable follow-up plans after suction curettage.

Adenomyosis is common disease in gynecology. The incidence rate is 2-20%. Among women with a willingness to terminate pregnancy, adenomyosis is not rare. Few gynecologists know that these patients are at the risk of DIC after artificial abortion. Since early diagnose and treatment of DIC are essential for patients’ survival and preventing severe complications, we suggest that postoperative coagulation function monitoring should be strengthened in these patients. However, we do not recommend to extend the hospital stay. For DIC is a rare complication among these patients, there is poor value in economic cost, time cost and treatment necessity for patients with adenomyosis to prolong hospital stay. We propose that post-operation health education should be given to such patients by gynecologists before discharge. The aims of the health education are to guide the patient to monitor their own symptoms (such as abdominal pain, massive vaginal bleeding) and to determine the exact date to retest blood coagulation. Due to the lack of available case datas, it is difficult to determine the appropriate time for coagulation function test. According to our case and several similar cases, we speculate that the first check should be within 3 days after operation. But more information is needed to support this speculation. Moreover, if patients with adenomyosis have a tendency of DIC, in addition to the common causes, the effect of adenomyosis should also be considered.