Recently, advancements in surgical techniques in the field of obstetrics and gynecology have led to an increase in laparoscopic surgeries. Laparoscopic surgery has many benefits compared to traditional open surgery, such as less scarring, less pain after surgery, a shorter recovery time, and less bleeding. However, laparoscopic surgery should be performed by experienced surgeons to avoid complications, such as injury to the bladder and rectum [1,2]. In patients with a history of surgery, the difficulty of surgery increases due to adhesion in the abdominal cavity; the tissue is hard, and the borderline is unclear [3]. Further, if the uterus is enlarged due to a huge uterine leiomyoma or uterine adenomyosis, a sufficient field of view cannot be obtained. These situations may increase the frequency of complications.

In our department, we started performing total laparoscopic hysterectomies (TLH) in 2014, and it has been used in over 1,000 cases. In our department, the surgeries are performed by a supervising doctor, surgeon, and a first assistant who is often not sufficiently experienced. Here, we report the case of a patient who experienced a rectal injury caused by the misinsertion of a vaginal pipe into the rectum. A vaginal pipe was used to guide the identification of the decision-cutting line of the vaginal wall in TLH.

To our knowledge, this is the second case of this kind to be reported in the world [4]. Injuries, such as the one presented herein, are a concern for all patients undergoing TLH. Therefore, we report this case to raise awareness among gynecological surgeons.

A 47-year-old, married, nulliparous woman had undergone open leiomyomectomy for multiple leiomyomas 7 years previously. Multiple uterine fibroids measuring 5-12 cm in size were observed in her uterus. An 8 cm-sized myoma was observed in the cervix (Fig. 1A, B), and the entire uterus reached the height of the umbilicus. Her first operation was difficult because the leiomyoma (in the cervix) obstructed the field of view. She later developed recurrent leiomyomas and worsening hypermenorrhea; however, she was not treated for 2 years because she had just been married and had a desire to fall pregnant. Two years later, she had not fallen pregnant, and her symptoms had worsened. Therefore, she decided to undergo TLH. Pelvic magnetic resonance imaging revealed that her uterus was approximately 10 cm in size with multiple leiomyomas and adenomyosis (Fig. 2A, B). 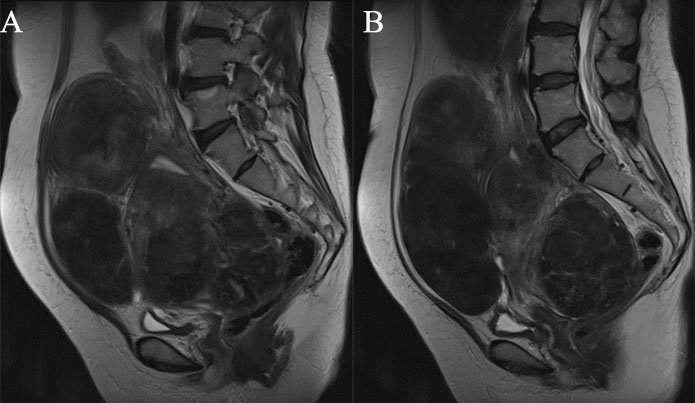 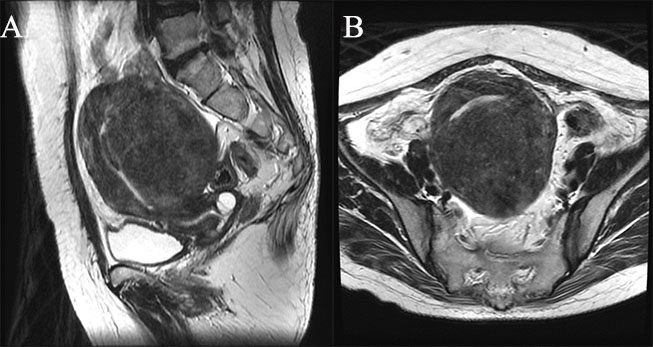 During the surgery, a uterine manipulator was inserted, and the ligaments and uterine artery were cut down. Usually, during the operation, the first assistant inserts a vaginal pipe into the vagina while cutting the vaginal wall. In this case, we noticed that the posterior vaginal wall and rectal wall were cut after cutting the vaginal wall (Fig. 3). We then noticed that the vaginal pipe had been inserted into the rectum instead of the vagina. A perforation had been created between the vagina and rectum. The repair was completed laparoscopically with the support of a gastroenterological surgeon (Fig. 4). The surgeon peeled back the layers of the vaginal and rectal walls, suturing each layer. Finally, the omentum was attached between the vagina and rectum to prevent leakage (Fig. 5). Seven days after the operation, an enema was performed to confirm that no leaks were present, and feeding was restarted (Fig. 6). The patient was discharged home on the 17th postoperative day in a good clinical condition. She continues to have no other side effects. Written informed consent for the publication of this case was obtained from the patient. This work was approved by the Institutional Review Board at Shimane University (IRB No. 201912120-1). Cutting of the vaginal wall. A perforation had been created between the vagina and rectum. The vaginal pipe was observed to have been inserted into the rectum. Yellow arrow: posterior wall, white arrow: rectum wall, red arrow: perforation. Attachment of the omentum between the vagina and rectum to prevent leakage. The omentum had to be sutured to the posterior vaginal stump. Yellow arrow: omentum, red arrow: vaginal stump. An enema is performed on postoperative day seven. No leaks or symptoms are observed.

The operator had to use forceps in the laparoscopic surgery; however, the forceps limited free movement. There is risk of a transition to open surgery if the operator cannot secure an adequate view due to complications, such as large leiomyomas and massive bleeding [7]. Lonky et al. (2017) [8] reported that a pelvic specimen weighing beyond the 151-300 g range or more than 501 g might be associated with problematic dissection due to the compromised visualization of the structures undergoing dissection. This is because of obstruction and atrophic changes in cases with a larger uterus and smaller uterus, respectively [8]. In patients with a history of surgery, the difficulty of surgery increases due to adhesion in the abdominal cavity. The tissue may become hard, and the borderline may be unclear [3]. These situations may increase the frequency of complications.

More than half of the injuries to surrounding organs have been reported to be caused when the navel is punctured [9-11]. The prevalence of injuries to the rectum is reported to be 0.04-0.07% [12,13]. Cases in which the vaginal pipe is inserted incorrectly are rare; such a misinsertion is normally due to strong adhesions caused by endometriosis or a narrow vagina.

Okamoto et al. have reported a rectal injury caused by misinserting a vaginal pipe [4]. Their case was similar to ours; however, their case had no adhesions, and the vaginal wall was thin. They also concluded that their case could have been prevented even if more care was taken.

This case prompted us to institute four protective measures: 1) tape the anus before surgery; 2) all members performing the operation need to have visual confirmation upon insertion of the vaginal pipe; 3) after insertion of the vaginal pipe, the assistant confirms by rectal examination that it has not been inserted into the rectum; and 4) before cutting the vagina, the section that will be cut is confirmed by all members performing the operation. These measures will prevent cases of misinsertion, ensuring that we can perform TLH safely.

We reported the case of a patient who experienced a rectal injury caused by the misinsertion of a vaginal pipe into the rectum. This case highlights the fact that even in situations where such an occurrence is rare, operations should be performed keeping in mind various factors that can cause complications.

Written informed consent for the publication of this case was obtained from the patient. The study was conducted in accordance with the Declaration of Helsinki and was approved by the Institutional Review Board at Shimane University (IRB No. 201912120-1).

We would like to thank Dr. Ryoji Hyakudomi (Shimane University) for their surgical support in this case.