The successful fetus implantation requires the proper growth of the fetus simultaneously with an appropriate receptive endometrium. The thin endometrium is not responsive to standard treatments, and it’s still a challenge for assisted reproductive techniques (ART) which usually leads to cycle cessation and unplanned embryo freezing [1,2]. So far, various strategies have been developed for the treatment of thin endometrium, including the long-term exogenous estrogen therapy [3], use of low dose aspirin [4], vitamin E [5], sildenafil citrate (vaginal) [6], electroacupuncture [7], and use of granulocyte colony-stimulating factor (G-CSF) [8]. However, the mentioned treatments are not successful in a number of women with a thin endometrium.

Previously, PRP has been studied as a treatment for several medical disorders, including nerve damages, eye epithelium defects, hair loss, myocardial damage, osteoarthritis, and tendinitis. Despite the widespread use of PRP in various medical fields, its effectiveness on obstetrics and gynecology diseases has been studied in rare studies [11,12,18]. Accordingly, the present study was designed to investigate the effect of PRP containing PDGF on the unsuccessful embryo implantation in women undergoing IVF, whether they had an appropriate endometrial thickness or not. The effects of PRP therapy on IVF failure patients were evaluated based on the rates of embryo implantation, successful pregnancy, and live birth. Our findings provide valuable information to improve pregnancy outcomes through the IVF process.

Eligible patients were randomly assigned into two groups, including patients who have received an intrauterine infusion of PRP and patients without PRP injection (controls). The inclusion criteria were infertile women with at least two IVF failures and age below 41 years old. The exclusion criteria were women with chromosomal, genetic, and uterine abnormalities, hematological or immunological disorders, and hormonal disorders. Also, the embryos that arise from such maternal and paternal abnormalities were excluded (Fig. 1). 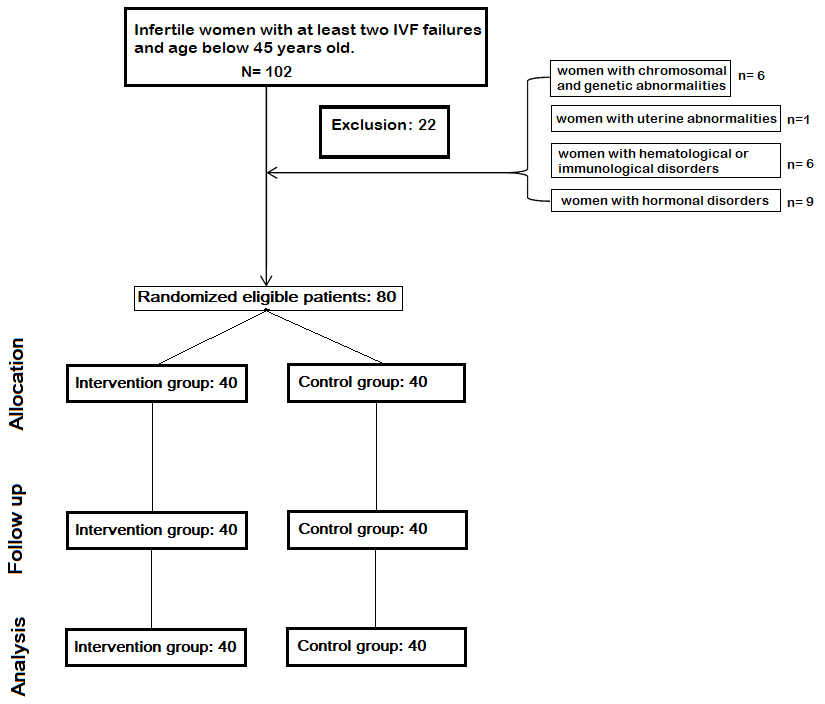 Before PRP therapy and embryo transfer process, standard hormone replacement therapy (HRT) with Estradiol valerate (Transdermal dosage: 0.2_0.4 mg/day; Aburaihan, Iran) was performed for all patients to endometrial thickness preparation. This dose causes blood levels of 200 to 400 pg/mL which is equivalent to the normal level in the late follicular phase [19]. Eventually, the endometrial thickness reached the appropriate size (7-10 mm) in 38 patients while 2 women did not reach the appropriate size (7 mm). Endometrial thickness is measured by ultrasound from the echogenic border to the echogenic border across the endometrial cavity on a sagittal midline image.

PRP is prepared from autologous blood by “Fertilize Lympho-PRP kit”. Firstly, 8.5 mL of venous blood was drawn from the syringe pre-filled with 1.5 mL of anticoagulant solution (ACD; Terumo; at a ratio of 10 : 1.5) and centrifuged immediately at 12,000X g for 10 min.

The blood was divided into three layers: red blood cells at the bottom, cellular plasma in the supernatant, and a Buffy coat layer between them. The plasma layer was collected to another tube and re-centrifuged at 12,000X g for 10 min. White sediment of platelet pellets was formed at the bottom of the tube that was PRP. According to the PRP kit’s instructions (PRP centrifuge kit; Prodizen, Korea), the white sediment dissolved in 1.5 mL plasma [the 1.5-line indicated on the tube for infertility cases] was used as PRP containing platelet growth factor. The IVF process is organized into four main steps as follows:

The “pregnancy live birth” was defined as the delivery of a live born child after 24 weeks of gestational age.

This parallel-group, single-blind, and randomized controlled trial was randomized by designing a table of the randomized block size of 6. To maintain single-blinding, the responsible investigator was unaware of the grouping of each patient. But, the main physician and patients were aware. However, the physician did not consciously interfere in the selection of patients for each group. In fact, she started the treatment process on the advice of a second researcher, who had designed a table of the randomized block without knowing the patients’ medical conditions.

A chi-square test was used to detect a relationship between quality variables. Also, the Mann-Whitney U test or t-test was used for quantitative variables. Generalized Estimating Equations (GEE) were used to determine the relationship between variables measured over a number of times during the study [Considering P-value 0.05 for all tests]. Data analysis was done using SPSS version 22.

This clinical trial was approved by the ethics committee of Ahvaz Jundishapur University of Medical Sciences with Ethical Code: IR.AJUMS.REC.1396.634.

All subjects gave their informed consent before participating in the study. All procedures performed in this study involving human participants were in accordance with the ethical standards of the national research committee and with the 2008 Helsinki declaration and its later amendments or comparable ethical standards. This clinical trial has been registered in the Iranian Registry of Clinical Trials (IRCT registration number: IRCT20180102038182N1).

All the demographic and clinical data of patients are presented in Table 1. Also, Table 1 presents the results of the statistical comparison of all variables in both the PRP group and controls (PRP group).

Table 1.Statistical comparison of all variables in both PRP group and controls (PRP-group).

The successful IVF process was observed in 6 (15%) and 2 (5%) patients among the PRP and PRP groups, respectively. However, based on Fisher’s exact test, there was not any statistically significant difference in terms of the successful IVF frequency between both groups (P-value = 0.2751). During the follow-up of patients, other IVF-related variables, including pregnancy rate, abortion, and live birth rate were investigated in both groups (Fig. 2). Although the rate of successful pregnancy and live birth rate were respectively higher in the PRP group compared with controls, there was not any statistically significant difference between both groups (P-Value 0.05).

There was no azoospermia case or testicular sperm extraction (TESE) case.

The mean (SD) time elapsed since the first IVF was 1.66 1.05 (1-5) years. From a total of 80 cases, 40 and 34 cases were respectively under standard HRT in the PRP group and control group. In the PRPgroup, 38 cases reached the appropriate thickness (7-10 mm) while 2 women did not reach an appropriate size ( 7 mm); after patient tracking, one of these two women eventually reached the successful pregnancy and live birth.

Receptive endometrium is one of several crucial factors for successful implantation and pregnancy [21]. The thin endometrium is not responsive to standard treatments, and it’s still a challenge for ART [1,2]. However, immunological, hormonal, anatomical, and infectious factors along with known genetic factors are involved in 50% of Pregnancy loss cases; in this regard, about 9.8% of infertile couples have chromosomal balanced rearrangement [22].

Several studies have investigated the therapeutic effect of PRP on endometrial growth and provided significant results [9-12]. In this regard, Munson et al.’s study evaluated the effects of PDGF on the proliferation of endometrial epithelial cells. Their results showed the existence of functional PDGF receptors on the endometrial epithelial cells that signal cell replication [23]. Previously, Surrey and Halme (1991) demonstrated that PDGF secreted from macrophages may have a significant role in endometrial cell proliferation [24]. The present study has investigated the effect of PRP containing PDGF on IVF outcomes, whether the endometrial thickness is appropriate (7-10 mm) or not ( 7 mm). Given that some infertility causes are unknown and not merely related to the endometrial thickness, we also assessed the effect of PRP therapy on two women with a thin endometrium ( 7 mm).

Based on our findings, the frequency of IVF success in the PRP group was partially more than PRP group. Although, this frequency difference was not statistically significant indicating that PRP therapy showed not any significant effect on the IVF success rate. In this regard, Chang et al.’s study showed that PRP promotes endometrial growth and improve pregnancy outcome in patients with thin endometrium [12]. Recently, Zadehmodarres et al. (2017) evaluated the effectiveness of PRP in the treatment of thin endometrium on ten patients with a history of inadequate endometrial growth. They showed the considerable effectiveness of PRP on endometrial growth [19]. Jang et al. (2017) showed that intrauterine administration of autologous PRP stimulated and accelerated the regeneration of the endometrium as well as decreased fibrosis in female rats [25].

In fact, the mentioned studies have merely focused on the effect of PRP therapy on the repairmen of endometrial thickness while some infertility causes aren’t merely related to the endometrial thickness. In this sense, although our results showed that PRP therapy can improve the IVF success rate whether the endometrial thickness is appropriate or not, its improvement effect was not statistically significant. So, our findings were inconsistent with the mentioned studies [12,19]. Moreover, our study more comprehensively explored the effect of PRP therapy on the improvement of the IVF process, pregnancy rate as well as live birth rate following patient tracking. Although the successful pregnancy and live birth rates were found to be higher in the PRP group, this difference was not statistically significant between both groups. Also, the number of embryos (1 and/or 2) has not affected the success of the IVF process.

The injection of PRP into the endometrium of IVF-failure patients may usefully affect the outcomes of the IVF process, pregnancy rate, and live birth rate, but not significantly so. Nevertheless, more researches are needed into a higher sample size to reach more accurate findings.

6. Weaknesses of this study

Considering a higher sample size for this study may give us more accurate findings.

All procedures performed in studies involving human participants were in accordance with the ethical standards of the national research committee and with the 2008 Helsinki declaration and its later amendments or comparable ethical standards [Ethical Code: IR.AJUMS.REC.1396.634].

We would like to appreciate the Department of Obstetrics and Gynecology, fertility infertility and perinatology research center, Ahvaz Jundishapur University of medical sciences. And also Center for Reproductive Medicine Mahzyar.

This study was funded by Ahvaz Jundishapur University of Medical Sciences.

Dr. Mahvash zargar, First and correspondence author, has received research grants from Ahvaz Jundishapur University of Medical Sciences. Other coauthors report no conflicts of interest relevant to this article.