Preterm premature rupture of membranes (PPROM) is defined as spontaneous rupture of membranes that occurs before 37 weeks’ gestation and at least 1 hour before the onset of contractions. PPROM occurs in approximately 3% of pregnancies and accounts for approximately 30% of preterm births [1]. The pathogenesis of the premature rupture of membranes is unclear. It has been reported that PPROM usually associated with intraamniotic infection, especially at younger gestational ages. The previous history of PPROM is a major risk factor for subsequent PPROM or preterm pregnancy [2,3]. Intrauterine infections include chorioamnionitis (CAM) and histological chorioamnionitis (HCA). Most intrauterine infections are categorized as HCA, which can only be diagnosed by postpartum pathology. HCA can cause nerve damage, bronchial dysplasia, neonatal pneumonia and other adverse pregnancy outcomes [4]. At present, there is no index diagnosis for HCA. Therefore, early diagnosis of premature rupture of membranes and chorioamnionitis and better understanding of the mechanism of early rupture of membranes are of great significance for preventing premature rupture of membranes and reducing intrauterine and neonatal infections. Tumour necrosis factor receptor-associated factor 6 (TRAF-6) is one of seven closely related TRAF proteins, which are adapter proteins that connect the tumour necrosis factor receptor (TNFR) superfamily to intracellular signalling transmission. TRAF-6 participates in interleukin-1 (IL-1) signalling and activates NF-kappa B. A dominant-negative mutant of TRAF-6 inhibits NF-kappa B activation signalled by IL-1. Moreover, TRAF-6 is a key adaptor that modulate inflammatory responses by regulating various signalling pathways [5].

The recent report shown that mammalian Ste20-like kinase 4 (MST-4) play an important regulatory role in innate immunity. MST-4 can lead to the abnormal function of downstream signalling molecules by impairing its oligomerization and ubiquitination activity through directly associates with and phosphorylates TRAF-6 in the Toll-like receptor (TLR) signalling pathway. In the finally, MST-4 regulates the production of downstream inflammatory mediators by inhibiting the activation of inflammatory pathways [6]. MST-4 was discovered as a new ste20-related kinase and belongs to germinal centre kinases (GCKs). By acting directly on TRAF-6, inflammation is inhibited by MST-4 [7]. In this paper, the expression of TRAF-6 and MST-4 in placental tissues was detected to provide an important basis for the prediction of PPROM with HCA.

A retrospective study was conducted on a group of pregnant women (n = 80) who had delivered at the Clinical Medical College of Yangzhou University from September 2017 to May 2019 and had provided consent to collect placental and foetal membrane specimens. The study obtained informed consent from all women and was approved by the Research Ethics Committee of College of Clinical Medicine, Yangzhou University (authorization number: KY201700902). Forty of the pregnant women were diagnosed with PPROM, and the controls consisted of 40 women with spontaneous labour at term (> 37 weeks). Inclusion criteria: all pregnant women were singleton pregnancy with cephalic presentation. Exclusion criteria: pregnant women complicated with immune system diseases, acute or chronic diseases, and other complications.

Paraffin-embedded foetal membrane tissue was removed for slicing, approximately 4 µm thick. The sections were dewaxed by xylene, hydrogenated by gradient alcohol, stained with haematoxylin, stained with aqua ammonia, stained with eosin, and sealed with xylene transparent. At high magnification, the neutrophilic granulocytes had lobulated nuclei, and the cytoplasm was pale. Five fields were randomly selected at high magnification, and cases with average neutrophil count greater than 5, were diagnosed as histological chorioamnionitis.

Streptomycin pro-bioprotein/peroxidase ligation (SP method) was used for this assay. Results: Under high magnification, JEDAS01D software was used to obtain images (I 40). Five fields of view were randomly selected for each sample and image analysis was performed using Image-Pro Plus. Yellow or brown in the nuclei were defined as positive expression and scored based on the number of positive cell expressions as follows: when the percentage of stained cells < 5%, the score was (-); 6% ~ 25% scored (+); 26% ~ 50% scored (++); and > 50% scored (+++). The placental tissue optical density value (IOD) was determined, then calculate the mean optical density value (MOD) based on the actual area of the tissue (area). MOD = IOD/Area

RNA from 50-100 mg placental tissues ground with liquid nitrogen was extracted with TRIzol reagent. The RNA concentrations and OD260:OD280 values were detected using the Take 3 ultra-micro and multi-volume detection board obtained from BioTek. Store the purified RNA at -80 °C until cDNA preparation.

Statistical analysis was performed with SPSS software (IBM, Armonk, NY, version 19.0). The results are expressed as the mean ± standard deviation (x ± s). The t test was used for comparison between the two groups. Differences among the three groups were analyzed by one-way ANOVA, and comparisons among the three groups were performed by the Student-Newman-Keulsa test. Correlation metrics were analysed using Spearman correlation. Statistical significance was achieved whenever p < 0.05.

Haematoxylin-eosin staining results showed that there was no infection in the control group. A total of 34 cases of HCA were combined with the PPROM group, with an infection rate of 85.00% (34/40), and 6 cases of HCA were not combined, as shown in Figure 1.

— Haematoxylin-eosin staining of foetal membranes (× 40) A: HCA; B: without HCA.

For the control group, PPROM with HCA group and PPROM without HCA group, there were no statistically significant differences in maternal age, BMI, white blood cell number, neutrophil number, and maternal temperature (p > 0.05), as shown in Table 1.

TRAF-6 expression was mainly localized in the nucleus, and MST-4 was expressed in the nucleus and cytoplasm of placental tissues (Figure 2). The expression of TRAF-6 and MST-4 in the placental tissue of the PPROM combined with intrauterine infection group was stronger than that of the control group and the PPROM without intrauterine infection group (p < 0.05). There was no significant difference between the latter two groups (p = 0.58).

Correlation between TRAF-6 and MST-4 expression in placenta

Spearman rank correlation analysis showed that the expression of TRAF-6 in the placenta was positively correlated with MST-4 expression (rs = 0. 67, p < 0.05). 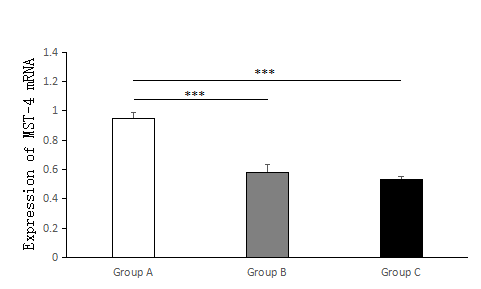 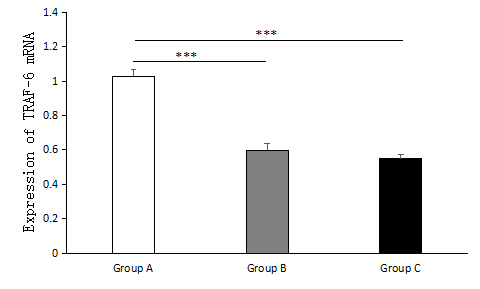 PPROM is a major cause of preterm delivery, which contributes to adverse perinatal outcomes [8]. Park et al. [9] suggested that HCA confers additional adverse risks for maternal and neonatal, such as earlier gestational age at delivery, neonatal sepsis, hearing impairment, neurologic morbidity, and even death. Petit et al. [10] indicated that home care management is a suitable alternative option for PPROM before 35 weeks’ gestation when the eligibility criteria are relevant. At present, there are no clear clinical indicators to diagnose the presence of intrauterine infection in PPROM. For example, there have been different conclusions on using procalcitonin to assess the prognostic value of intrauterine infection in PPROM patients. One study [11] suggested that the level of procalcitonin PCT in maternal blood was higher than that in maternal blood CRP and white blood cell count, while another study [12] suggested that procalcitonin was not valuable in the management of PPROM patients. This experiment also tested the white blood cell count of the peripheral blood of pregnant women before labour. The results were consistent with the latter study. A short review delivered by The FIGO Working Group on Good Clinical Practice in Maternal-Fetal Medicine showed that it is very active and dynamically evolving of clinical research on predictive strategies for PPROM and preterm labour [13].

The present research shown that there was a significantly higher mRNA expression of TRAF6 and MST4 in placentas of women delivering prematurely with PPROM with HCA comparied with women with controls and PPROM without HCA. It can be considered that TRAF6 and MST4 are involved in the occurrence of intrauterine infection.

TRAFs are cytoplasmic multifunctional signal junction proteins that are genetically highly conserved and play an important role in intracellular signalling pathways. Currently, seven TRAF family proteins (TRAF1~7) have been found. TRAF6 is a protein of the IL-1 signalling pathway that is widely distributed in the body. The N-terminal region of TRAF6 contains a RING finger, and TRAF6 plays a role of an E3 ubiquitin ligase and activates the NF-kappa B signalling pathway [14].

Studies have shown increased expression of TRAF6 in colitis [15], rheumatoid arthritis [16] and ankylosing spondylitis [17], indicating that TRAF6 is involved in a variety of inflammatory reactions. TRAF6 regulates inflammation and plays a key role in cell survival and proliferation. Therefore, the expression of TRAF6 can be downregulated to inhibit the occurrence of inflammatory reactions, such as to control the development of intrauterine infection. TRAF6 is regulated in a variety of ways, including one that inhibits its function by direct binding to TRAF6, thus effectively inhibiting the activation of NF-KB and inhibiting inflammatory reactions, such as that between microRNA-146a and PLT [18,19]. Common GCKs in mammals include five related proteins: MST1 (STK4), MST2 (STK3), MST3 (STK24), MST4 (MSAK) and YSK1 (STK25 or SOK1). MST4 is widely expressed in various mammalian tissues. It is highly expressed in embryos, thymus, prostate and peripheral blood leukocytes, and especially in the placenta, which provides a theoretical basis for studying the role of MST4 in placenta-related diseases [20]. Although MST4 is highly homologous with MST3 kinase, it has the opposite effect on cell growth [21]. MST4 can specifically regulate the Ras/Raf non-dependent ERK pathway through MEK1, promote cell growth and transformation, and participate in cytoskeletal rearrangement, morphological formation, apoptosis, differentiation and other various cellular activities, thus playing an important role in the physiological and pathological process of the body [22].

This study provides evidence for the involvement of TRAF6 and MST4 in the combined process of PPROM with HCA. However, how TRAF6 stimulates the increased expression of MST4 and how signalling pathways are regulated is still unclear. Therefore, it is necessary to further study the interaction mechanism of TRAF6 and MST4 in placental trophoblast cells, which may provide new detection markers for the early diagnosis of PPROM with HCA.

There are several limitations in the present study. First, the number of samples included in this study is small, and the study was performed at a single centre. Second, we have not yet validate our combined prediction model with a different patient population which may limit the generalizability of the study findings. Third, the single foetal membrane sample was used rather than multiple samples from the same patients. Therefore, further multicentre research studies with a larger sample size should be performed in the future.

In conclusion, this study confirmed that PPROM combined with histologic chorionic amnionitis was related to TRAF6 and MST4. Further studies will be needed to better understand their specific reaction mechanism.

— Haematoxylin-eosin staining of foetal membranes (× 40) A: HCA; B: without HCA.