Episiotomy is a commonly used procedure for enlarging the vaginal space through an iatrogenic perineal cut. The technique and suture materials that chosen for episiotomy repair directly affects the early and late complications, especially dyspareunia, skin dehiscence, the amount of the analgesic drugs used and perineal pain [1].

Mediolateral episiotomy (MLE) repaired with continuous subcuticular suture is a commonly used technique. Compared with the conventional separate suture technique, the subcuticular suture technique is associated with less postpartum perineal pain and does require the sutures to be removed [2-6]. Recently, many studies have suggested that using rapidly absorbable (with an absorption period of about 42 days) and polyglactin (absorption period of about 62 days) sutures reduces episiotomy pain and complaints [3,6,7]. In addition, using skin adhesives is another method of episiotomy repair and enables safe, cheap, easy and fast application [8,9]. They can be resolved biologically and are bacteriostatic [10,11]. Only a limited number of studies with small sample sizes compare tissue adhesives and continuous subcuticular suture of the perineal skin.

This study compares the aesthetic and functional efficacies of n-butyl cyanoacrylate and 3/0 rapid absorbable polyglactin 910 sutures in cutaneous repair of episiotomy.

The study involved 52 parturient women who had spontaneous vaginal delivery with episiotomy at one clinic over a one-year period. This prospective, randomized, case-controlled study was approved by the institutional ethics committee.

Over the duration of the study, 167 patients who had a spontaneous vaginal delivery and an episiotomy at the delivery room of our department were utilized for the study. The inclusion criteria were (a) acceptance and signing of an informed consent form; (b) being reproductive age, between 18 and 44 years old; (c) having a term pregnancy (37-42 weeks); and (d) vaginal delivery with vertex presentation and receiving an episiotomy. The exclusion criteria were (a) having systemic or endocrinological diseases like diabetes, ischemic heart disease, hyperlipidemia, collagen tissue disease, hypertension, etc. (n = 45); (b) multiple pregnancy (n = 3); (c) third- or fourth-degree perineal laceration during spontaneous vaginal delivery (n = 8); (d) atonia or hemorrhage during the postpartum period (n = 1); (e) smoking while pregnant (n = 24); (f) dyspareunia before pregnancy (n = 18); and (g) refusal to participate in the study (n = 16).

The duration of skin repair was measured in both groups, and the patients were kept under observation at the hospital for 48 hours. The patients received routine postpartum medical treatment during this period, and paracetamol pills (Parol, 500 mg, Atabay Pharmaceutical Industry, Istanbul) were used as an analgesic if the patients requested, up to 4 pills per day.

Additionally, the patients were evaluated at 48 hours and 6 weeks postpartum for perineal skin pain. The degree of pain was rated with the Visual Analog Scale (VAS) (Table 1) [12]. This scale registers pain as 0 (no pain) to 10 (very severe pain) with a 10 cm ruler, and the distance that the patients marked was measured and noted in centimeters.

Both groups were also evaluated in terms of dyspareunia and scar aesthetics of the episiotomy area at 6 weeks postpartum. The Vancouver Scar Scale (VSS) was used to rate the scar aesthetics (table 2) [13].

In this study, the Statistical Package for the Social Sciences (SPSS) version 10.0 computer program was used to analyze the statistical data, which were expressed as means and standard deviations. Student’s t-tests (for normally distributed variables) or Mann-Whitney U-tests (for non-normally distributed variables) were used for comparison. Fisher’s exact chi-square tests were used to compare qualitative data. The statistical significance level was set as p < 0.05. 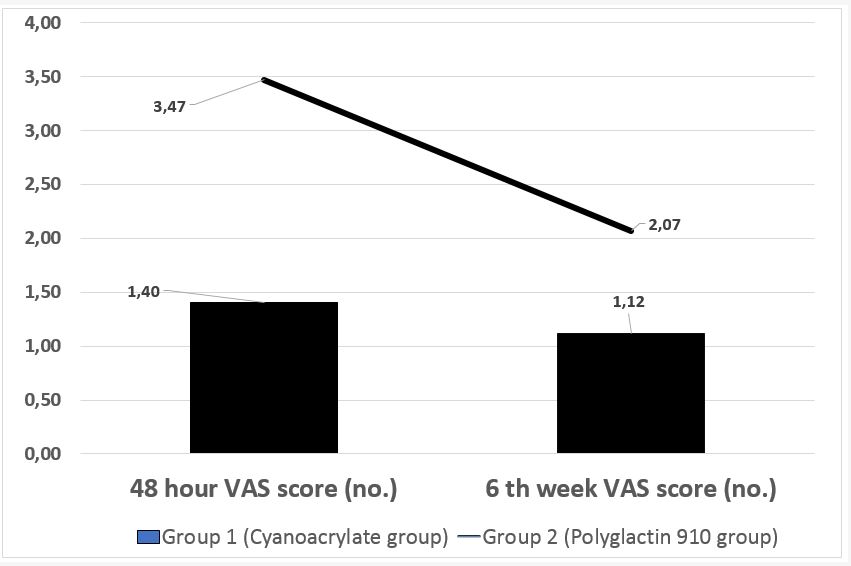 — Comparison of pain rated according to the Visual Analog Scale between group 1 (cyanoacrylate) and group 2 (polyglactin 910).

Only a few studies [14] have been conducted on using tissue adhesives for episiotomy repair. All published studies had the main limitations of low sample size or reported a study group without control. In one study, the effect of episiotomy repair with chromic catgut or skin-adhesive material was investigated. It was shown that using n-butyl-2-cyanoacrylate for episiotomy had better results [15]. The current study results also report the advantages of cyanoacrylate for episiotomy repair, as compared to the subcuticular technique with regard to pain score. Using another tissue adhesive molecule octyl blend cyanoacrylate also made the episiotomy repair painless, effective and safe [16]. Pain may be associated with micturition, walking, and defecation. Compared with subcuticular closure, enbucrilate had the advantage of less perineal pain during these functions [8]. The low number of paracetamol tablets used by the tissue-adhesive group in the present study also supported the previous study’s results regarding the painlessness of tissue adhesives.

The pain related to episiotomy repair also important in long term period. Following one and half months of episiotomy repair, the women may face with the problem of dyspareunia. Enbucrilate give the women the chance of more sooner pain free intercourse [8,9]. The similar molecule (n-butyl cyanoacrylate) used in our study also supported this finding.

Skin adhesives (octyl-2-cyanoacrilate) had also the advantage of short operation time with similar complication rates compared with polyglactine 910 [9]. The easy application technique and fast re-approximation time of wound lib with tissue adhesive may make the operation time shorter as in our study.

The reported complications of episiotomy closure were skin dehiscence, adhesive / suture detachment, perineal edema, severe pain, longer hospital stay, granuloma formation, local infection and dyspareunia. Many studies reported the similar complication rates of tissue adhesive [14] compared with suture methods. In our study, tissue adhesive group had 11%, while subcuticular group had 16% of complication rate. Comparable dyspareunia rates in both groups was also observed. The current review showed that not suturing the skin caused less short-term and long-term pain compared with suturing the skin as well as an increased rate of skin separation. Skin adhesives caused less short-term pain without a statistically significant increase of skin separation, as compared with the suturing group [14].

Closure of episiotomy with tissue adhesive or suture material causes acute inflammatory reaction, pain, itch and discomfort. These reactions may result in perineal pain and cosmetic problems [15]. The comparison of two techniques focusing on cosmetic results has not been well investigated. The current study also reported the comparable scores of Vancouver Scar Scale in tissue adhesive and subcuticular skin closure.

Clinical experience indicates that iatrogenic cuts that are not clean, have bad wound approximation, have a wet surface and are under high wound tension are repaired with sutures rather than with tissue adhesives. Wounds on mucosal surfaces (e.g., the vagina), on areas with high moisture (such as the perineum) and in hairy areas are also treated with limited use of tissue adhesives [17-20]. Episiotomy repair has some of these properties. These factors result in the limited use of tissue adhesives in episiotomy repair. Based on this main issue, studies investigating the effects of cyanoacrylate on episiotomy repair may have clinical value, and the results of such studies may enlarge the knowledge on this subject. Our study reports the successful use of cyanoacrylate for episiotomy repair with cosmetically and aesthetically good outcomes.

The main limitations of this study are the small sample size and its use of patients from a single center. Future studies including more patients with multicenter participation may support our study results.

The efficacy of n-butyl cyanoacrylate was similar to that of 3/0 rapid absorbable polyglactin 910 sutures for cutaneous episiotomy repair and that the taping method had advantages, like being fast, safe and painless. However, more studies are needed for efficient use of skin adhesives for repairing episiotomies.

Ethical Approval and Concept to Participate

All of the procedures performed in this study, which involved human participants, were in accordance with the ethical standards of the institutional and/or national research committee and with the 1964 Helsinki Declaration and its later amendments or comparable ethical standards (Issue date December 27, 2007, registration number 2007/69). Informed consent was obtained from all participants included in the study.

Thank numerous individuals participated in this study. Thanks to all the peer reviewers and editors for their opinions and suggestions.

The authors report that they have no proprietary or commercial interest in any product mentioned or concept discussed in this article.

— Comparison of pain rated according to the Visual Analog Scale between group 1 (cyanoacrylate) and group 2 (polyglactin 910).