Interleukin-6 (IL-6) is one of the cytokines that is involved in cell-to-cell communication by the immune system. The expression of IL-6 in the acute phase response contributes to the host’s defenses against infections or tissue injuries by stimulating immune responses and hematopoiesis. Continuous dysregulated production of IL-6 appears to play a key pathological role in various diseases such as pathogenic inflammation, autoimmunity, and malignancy [1]. There are several malignant and benign tumors that are associated with an increased secretion of IL-6, including breast cancer, lung cancer, ovarian cancer, gastric cancer, and cardiac myxoma [2-4]. It has been reported that increased levels of serum IL-6 due to malignant tumors is associated with a patient’s prognosis and symptoms including fever and cachexia [5].

Recently, several cytokines such as IL-6 and TNF-α are thought to contribute to the progression of myocardial damage and dysfunction in congestive heart failure (CHF) [6]. Uterine leiomyoma has been reported to cause the severe anemia induced by menorrhagia [7], and anemia is the one of the most common comorbidities [8]. However, there have been no reports that demonstrate a causal relationship between CHF and inflammatory cytokines secreted from uterine leiomyoma cells.

In this study, we report a case of a patient with CHF which may have been caused by overexpression of IL-6 by uterine leiomyomas.

A 53-year-old woman, gravida 4, parity 3, with uterine leiomyoma presented with a 2-week history of progressive dyspnea and leg edema. She had no family history of heart disorder or autoimmune disease and was taking no regular medication. Her menstrual history revealed a regular menstrual cycle of 28-day duration with a bleeding phase lasting for 4-5 days with moderately intense bleeding. She had had amenorrhea for 2 months, prior to her presentation.

At her first clinical appointment, her blood pressure was 161/103 mmHg, and heart rate was 126/min and regular. Her body temperature was 37.5 ℃ and percutaneous oxygen saturation was 95% on room air. No pathological cardiac murmur was audible, but respiratory sounds were attenuated in the right lower pulmonary fields. Her lower extremities were severely edematous on both sides. Her initial screening blood tests showed mild anemia (Hb 9.9 g/dL) and mild inflammatory reaction (serum CRP 5.5 mg/dL). The levels of B-type natriuretic peptide were 2,186 pg/mL (normal range; ≤ 18.4 pg/mL) and troponin T levels were negative. Other hormonal tests were all within normal range, including FT3, FT4, and TSH. A trans-thoracic echocardiogram demonstrated a remarkably low left ventricular ejection fraction (LVEF) of 17%. Neither notable valvular dysfunction nor abnormal shunt flow was visible. A chest X-ray showed an enlarged cardio-thoracic ratio (61.6%) with right-sided pleural effusion (Figure 1). An electrocardiogram showed a sinus rhythm at 116 bpm without any other abnormal findings. Coronary angiography showed no significant stenosis in both coronary arteries (Figure 2). An enhanced abdominal computed tomography demonstrated an intra-abdominal uterine tumor which remarkably compressed the vena cava (Figure 3). Magnetic resonance imaging (MRI) of the pelvis showed a well-circumscribed solid tumor (13 cm × 15 cm) in the uterine fundus with low-intensity signals on both T1- and T2-weighted images, suggestive of intramural leiomyoma (Figure 4). The cytology of the cervix was negative for malignancy, but an endometrial cytology could not be performed due to the severe deformity of the uterine cavity. 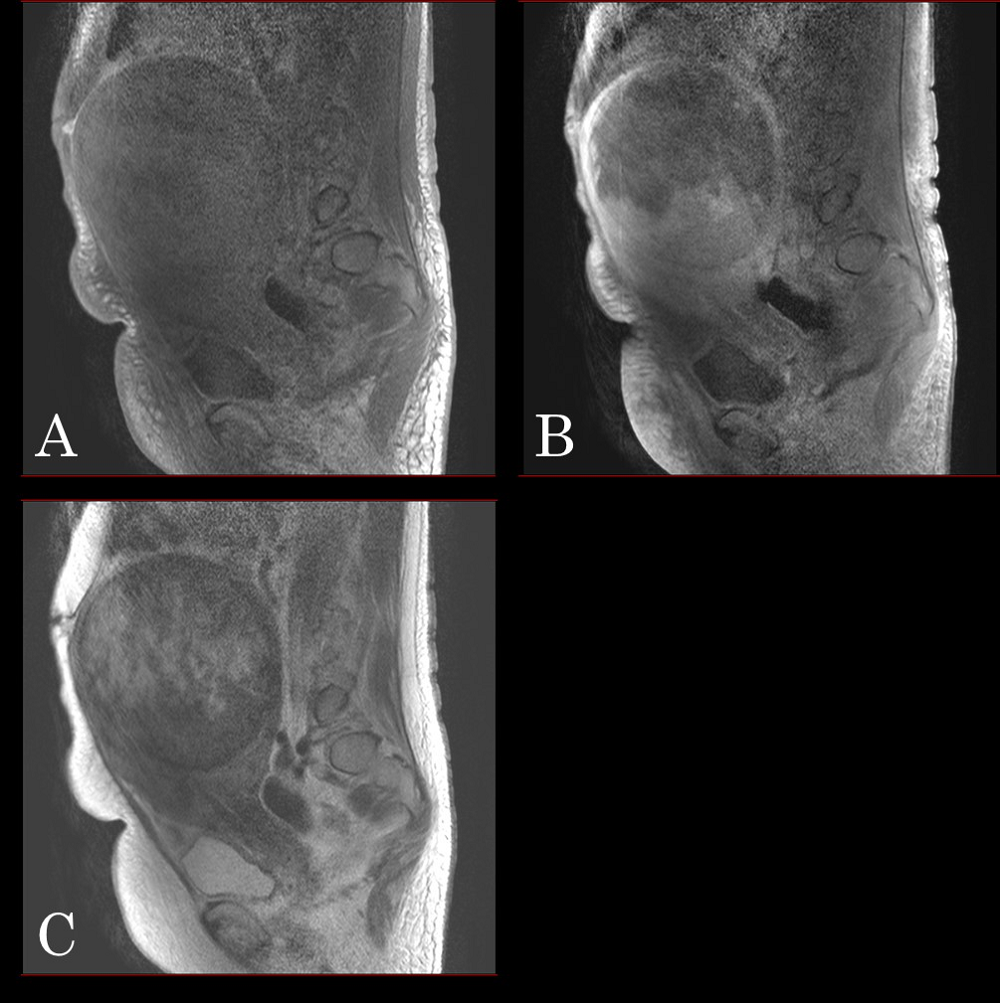 — A magnetic resonance imaging displaying a well-circumscribed solid tumor with hypointensity on T1- (A), enhanced T1W- (B), and T2-weighted images (C).

She was diagnosed with CHF and prescribed daily oral administration of perindopril of 4 mg, azosemide of 30mg, and eplerenone of 50 mg. However, after 3 weeks of treatment, her condition failed to improve, and an echocardiography showed that LVEF was even lower than previously measured, at 12%. Because her chief complaint was severe edema on both lower extremities, which was thought to be derived from a compressed vena cava by the large uterine leiomyoma, we decided to conduct a total abdominal hysterectomy with bilateral salpingo-oophorectomy to alleviate compression of the vena cava.

The surgery was successfully performed, and a locally expanding uterine leiomyoma was noted intraoperatively. The uterus weighed 2,4 Kg. Figure 5 shows the macroscopic finding of uterine leiomyoma. Microscopic findings confirmed uterine leiomyoma with hyalinization. 27 days postoperatively, the right-sided pleural effusion and leg edema had completely resolved without any other additional treatment (Figure 6). 288 days postoperatively, she remained without recurrence of heart failure symptoms, and LVEF was found to have improved to a normal level, measured at 42%. In order to help elucidate the mechanisms by which myocardial systolic dysfunction had developed and had improved after surgery, serum IL-6 and TNF-α levels were measured using blood samples obtained both preoperatively and 288 days postoperatively. Preoperative serum IL-6 levels were elevated at 36.2 pg/mL (normal range; ≤ 4.0 pg/mL), but postoperatively they were found to have dropped markedly to 1.6 pg/mL, well within the normal range. No difference was noted between preoperative serum TNF-α levels (normal range; < 1.66 pg/mL) and postoperative levels. Moreover, immunohistochemical analyses demonstrated immunologically positive staining for IL-6 in the cytoplasm of most uterine leiomyoma cells, but were negative for TNF-α staining (Figure 7). 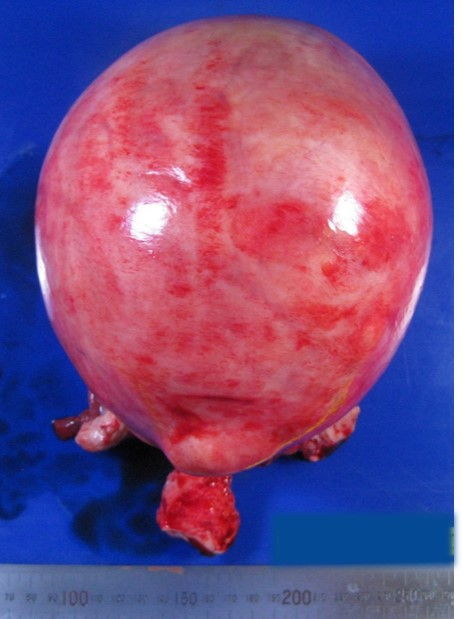 — A macroscopic finding of uterine leiomyoma. 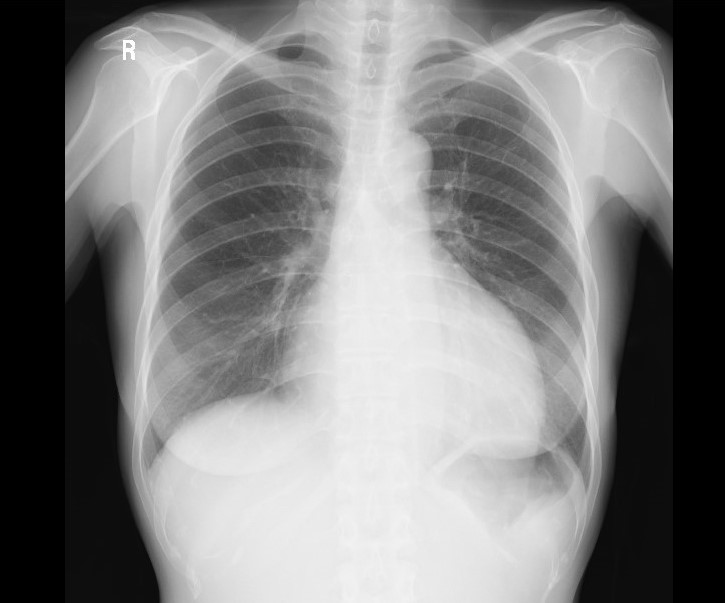 — A chest X-ray on 27 days postoperation. 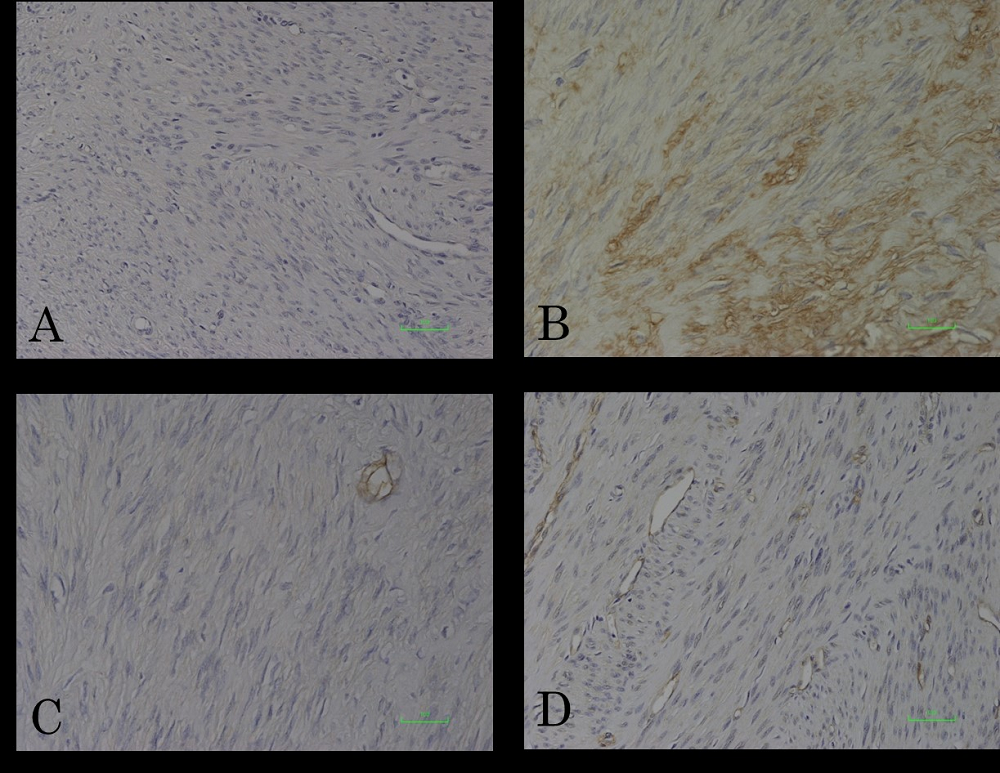 Heart failure is typically classified into two major types based on the functional status of the heart; (i) heart failure with preserved ejection fraction (HFpEF) and (ii) heart failure with reduced ejection fraction (HFrEF). LVEF is usually measured as less than 50% in patients with HFrEF, and the most common cause is acute coronary syndrome. In contrast, LVEF is usually more than 50% in patients with HFpEF which is more commonly associated with hypertension, severe anemia, vascular shunting, acute coronary syndrome/ischemia or dysrhythmia/arrhythmias [9]. In this case study we present a 54-year old lady with uterine leiomyoma who presented to us with congestive heart failure and in whom we determined an LVEF as low as 17%. She was unresponsive to conventional medication for congestive heart failure and, aside from noting that her uterine leiomyoma had led to a compression of the vena cava, the cause of her cardiac dysfunction was unclear.

Anemia is one of the causes of heart failure, and uterine leiomyomas sometimes lead to severe anemia following menorrhagia. However, it has been reported that hemoglobin levels in cases of severe anemia that cause heart failure are typically less than 5 g/dL [10]. In the literature there is a similar case by Chee et al., in which the authors report a renal cell carcinoma that was similarly associated with HFrEF type heart failure [11]. In their case, cardiac function also improved (although to a lesser degree than our case) from 34% to 50% following resection of the tumor. Interestingly, there is a pathological condition called Meigs (and a related condition called Pseudo-Meigs) that exhibits pleural effusion caused by abdominal tumor that also resolves following tumor removal. Specifically, Meigs syndrome is the development of pleural effusion and ascites in association with ovarian fibroma. while Pseudo-Meigs syndrome, on the other hand, describes conditions in which other types of abdominal tumors, similarly associated with pleural effusion and ascites that respond to tumor excision, manifest [12]. In these pathologies, vascular endothelial growth factor secreted by the tumor appears to mediate an increased vascular permeability and hence cause the ascites [13]. In both Meigs and Pseudo-Meigs syndrome, ascites usually precedes pleural effusion, although there are some atypical cases without ascites [12]. Considering the possibility that a causal relationship between the manifestation of an abdominal tumor and development of adverse hemodynamic changes as apparent in the pathological entity of Pseudo-Meigs syndrome, might also explain the development of heart failure in our patient we decided to perform a total hysterectomy to completely excise uterine leiomyomas. This resulted in a remarkable resolution of disease symptoms and a prompt disappearance of the right-sided pleural effusion. Furthermore, LVEF gradually recovered with no additional treatment, and LVEF improved from 12% to 46% at 12 months after surgery.

Although the patient showed no infectious signs during hospitalization, some systemic inflammatory signs, including notably a markedly raised serological IL-6 concentration of 36.2 pg/mL, were found prior to surgery. Because removal of the uterine leiomyoma not only improved heart failure, but was also accompanied by a dramatic fall in serological IL-6 concentration with a resolution of systemic inflammatory signs, it was suspected that IL-6 secreted by uterine leiomyoma may have played a vital role in the observed hemodynamic changes including development of heart failure. IL-6 is not a tissue specific cytokine, and heart failure itself has been reported to cause increased secretion of IL-6 alongside myocardial tissue damage [4]. In our case, the preoperative elevated serum IL-6 decreased after surgery accompanied by an improvement of heart failure. Moreover, immunohistochemical analyses revealed immunologically positive staining for IL-6 in the cytoplasm of uterine leiomyoma cells. These observations support the hypothesis that IL-6 was produced by leiomyoma cells.

IL-6 signaling in cardiac myocytes in the acute phase exhibits cardioprotective effects against oxidative stress and induces anti-apoptotic cellular pathways [14]. However, a prolonged effect of IL-6 in the chronic phase can lead to maladaptive cardiac hypertrophy and reduced contractile function [14]. In addition, myocytes themselves secrete IL-6 in response to tissue damage, which can result in a vicious cycle of deteriorating cardiac function [1]. It has also been reported that serum TNF-α increases in patients with myocardial injuries such as ischemic heart disease or myocarditis [15]. Similar to the cytokine IL-6, the role of TNF-α is considered to be an important mediator in coordinating cellular protective mechanisms against acute myocardial damages. Alike IL-6, chronic and sustained high concentrations of TNF-α also appear to contribute to the exacerbation of heart failure [16]. However, in our case, uterine leiomyoma cells were immunonegative for TNF-α, suggesting no involvement of TNF-α in the induction of heart failure.

In conclusion, we report a case of congestive heart failure in a middle-aged post-menopausal with uterine leiomyoma that presented without typical precipitating features of severe anemia or excessive menstruation that resolved following hysterectomy. Our investigations, specifically those of (i) a severely elevated serological IL-6 concentration, (ii) a high IL-6 expression within excised leiomyoma tissue and (iii) a marked fall in serological IL-6 to within normal levels following hysterectomy, led us to conclude that IL-6 secreted by the leiomyomas had played a pivotal role in mediating the development of heart failure in this lady. To our knowledge this is the first reported case of congestive heart failure that appears to have been mediated by IL-6 producing uterine leiomyomas. As removal of the uterus led to complete resolution of the patient’s disease we believe that further studies investigating hysterectomy as a novel treatment approach for congestive heart failure of unknown origin in uterine leiomyomas are highly warranted.

All subjects gave their informed consent for inclusion before they participated in the study. And ethical approval was waived by the Ethics Committee of Kyoto Chubu Medical Center.

We are grateful to Dr. N. Ohara for useful discussion and carefully proofreading the manuscript.