The frequency of congenital hydrocephalus (CH), depending on the diagnostic criteria used, ranges from one to 32 per 10,000 live births [1]. The prenatal diagnosis of associated with CH congenital malformations, that suggest, spontaneous abortions or fetal and neonatal death, is significant, because they are often lethal or impossible to treat. In these cases, it is commonly recommended that the pregnancy be terminated for medical reasons (MTP) [2,3].

Advanced maternal age has long been considered a particular obstetric risk factor, although there has not been significant medical evidence in literature to support this statement [4]. Social trends in recent decades have prompted women to postpone their first pregnancy, with some attempting to give birth after the age of 40 [5]. In the United States, the number of women aged 35-39 giving birth for the first time has increased nine-fold from the mid-1970s to 2012 (from 1.7 to 11.0 per 1000) [6]. Some authors find no significant difference in the outcome of pregnancies, both for the mother and child, between older and younger mothers, however others disagree [7-9].

The aim of this study was to determine whether maternal age, either on its own or in combination with other risk factors and associated anomalies, is a risk factor for the development of hydrocephalus.

A retrospective study of 182 fetuses with CH was studied by fetal autopsy. Most of them (172 fetuses) were received over a period of three years (2006-2009), out of a total of 21,316 (0.8%) births at an Embryo-Fetopathologic Clinic at the Centre for Maternity and Neonatology, Tunis, Tunisia. The remaining ten fetuses with AH were obtained from Obstetrics and Gynaecology Clinic at “St. George” University Hospital, Plovdiv, Bulgaria in 2016, out of a total of 2, 104 (0.5%) births. The author worked in Tunis during the period 2006-2009, and the data shown for Bulgaria are the results of continued research, representing the number of cases found from 2006-2016, through fetal autopsy, as this is the pilot research for Bulgaria in regard to the diagnosis of CH by autopsy. The fetuses are the result of termination of pregnancy due to medical reasons, spontaneous abortions, stillbirths, and neonatal death.

Maternal and fetal data were collected from the obstetric history and the fetal autopsies describing the characteristics of the mothers and their fetuses. The data collected included the age of the mothers, the number of previous pregnancies and births, medical history of the mother, poor habits, prenatal ultrasound results, medications used throughout the pregnancies, blood group data, incest, and place, method, and term of the interruption of pregnancy. With regards to fetal characteristics, data was collected regarding gender, birth weight, gestational week, and origin (single or multiple pregnancies) for each fetus.

After parental consent for the interruption of the pregnancy, autopsy of the fetus, macro- and microscopic examination, the autopsy was immediately performed by a team of fetopathologists in which the author participated for the purpose of proving congenital hydrocephalous and searching for other anomalies.

The procedures followed were approved by the institutional Ethics Committee of the |Medical University of Plovdiv (Protocol 5, 29.09.2016) and were in accordance with the Helsinki Declaration of 1975, revised in 2000.

The autopsies included inspection, biometrics, and a classical “in-situ” section of the fetuses. The brain was examined after 10% formaldehyde preservation for a period of six months. The ventricular widths were measured at their central parts. Dimensions greater than 10 mm of ventricular expansion were defined as hydrocephalus, and over 15 mm, severe ventriculomegaly [10]. In each study, materials for the histological examination were obtained from the cerebral cortex, cerebellum, brainstem, choroid plexus, and meninges for the purpose of proving congenital hydrocephalous and searching for other anomalies.

Fragments for karyotype testing were taken from the skin, lung, and placenta. In this research, karyotype examination is limited, as it cannot be applied to macerated fetuses.

The statistical program SPSS version 19 was used for the interpretation of the data. A descriptive, correlation and chi-squared analyses were used. A p-value under 0.05 was accepted for statistical significance.

Sixty-nine (38%) of the fetuses had IH and 113 (62%) fetuses had AH. Associated hydrocephalus is regarded as every diagnosis of hydrocephalus with other anomalies in all other organs and systems. Both types of hydrocephalus were seen from pregnancies of mothers of all ages. The largest group of mothers was between 27-35 years of age, followed by a group of older mothers (36-50 years old). Fifteen mothers were aged over 38 years, and 8 over 40 years. The age range of the AH-bearing mothers was 21 to 43 years, and of the IH-bearing mothers 21 to 49 years. The mean age of the mothers was 29.95 ± 7.18, with the lowest age being 21 years and the highest 49 years. The distribution of hydrocephalus types by the age groups of the mothers is presented in Table 1.

Table 1 — Distribution of congenital hydrocephalus according to the age of mothers.

Table 2 — Distribution of congenital hydrocephalus by incidence of consanguinity in the fetus. — Distribution of congenital hydrocephalus by degree of consanguinity in the fetus.

Prenatal karyotyping was performed in 31(17.0%) of all researched cases, and 13 of them were found to have a normal karyotype; however in the other 18 of the 31 cases, a chromosomal or gene aberration was found. CH with a lethal outcome, as well as AH were significantly associated with a maternal age over 40 years and third-degree consanguinity (Table 5).

The abnormality of the cerebral cortex - polygyria was significantly associated with the mother’s age (Table 5). The proportion of CH associated polygyria was three-fold higher in mothers over the age of 35 years, than in mothers under this age. The risk in the group of mothers over 35 years was moderate [OR = 4.894 CI 95% (1.094 - 13.940)] (Figure 2).

Aqueductal stenosis (AS) was significantly associated with maternal age (Table 5). The incidence of CH with a lethal outcome increased more than 5.5-fold in cases with the combination of an AS and a maternal age between 16 and 26 years. The risk of occurrence of both combinations was moderate [OR = 6.300 CI 95% (0.986-40.246)] (Figure 2). 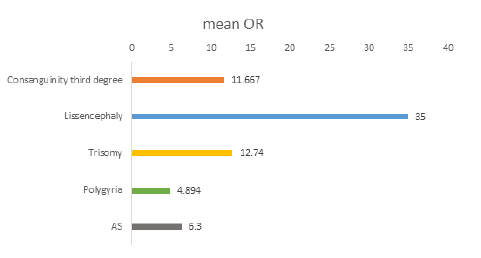 — Distribution of the risk of association between congenital hydrocephalus and other abnormalities.

There is no single opinion in literature on both the age of the mother as a risk factor and the magnitude of risk for congenital hydrocephalus. In the Shawky and Sadik study, the age of mothers over 35 was significantly associated with the occurrence of congenital anomalies [11]. According to Nazer et al., the association between maternal age and the prevalence of congenital abnormalities is a U-shaped curve, with peaks observed in mothers under the age of 20 and over 39 [12]. The study of El Koumi et al. showed that mothers aged under 20 and over 35 years are associated with the occurrence of a greater number of congenital malformations without statistical reliability, as opposed to the presence of consanguinity (p < 0.05) [13].

In the publication of Sipek et al., a significantly increased risk of CH in mothers of 37 years and over is indicated [14]. This finding is not shared by Forrester and Merz, according to which the incidence of IH was lower in mothers with higher age group (30-39 years) [15]. In their studies, Murshid et al., Stoll et al., and Van Landingham et al. did not find a statistically significant relationship between the age of mothers of children with CH and those of healthy children [16-18].

The nature of the present study did not allow a control group to be available; the authors searched for statistically significant relationships between maternal age, maternal risk factors, consanguinity, and some other associated with hydrocephalus malformations. CH was significantly associated with a maternal age of over 40 years and consanguinity [OR = 11.667 CI 95% (0.924-147.298)], which supports Shawky and Sadik, as well as Nazer et al.’s research.

In the case of AH, the combination of maternal age over 40 years and consanguinity was even more significantly associated [OR = 18.750 CI 95% (1.162-302.599)], which supports Sipek et al.’s research. These results confirm the importance of maternal age as a risk factor, especially in cases where there are other maternal risk factors present, such as consanguinity present.

In cases of a maternal age in the range of 16-26 years, the likelihood of occurrence of CH with a lethal outcome associated with an AS (stenosis of the aqueduct of Sylvius) increased by more than six-fold [OR = 6.300 CI 95% (0.986-40.246)], which confirms to some extent the assertion that a young age of the mother is also a specific risk factor for the occurrence of AH [19].

A significant association was established between CH with a lethal outcome and the presence of trisomies and maternal age over 38 years, with a strong correlation between them (Pearson Correlation, r = 434) and a high risk [OR = 12.740 CI 95% (3.402-7.710)]. This confirms the assertion of Yoon et al., according to which an advanced maternal age is the most important, although the only non-genetic factor for the occurrence of trisomies, due to an increase in chromosomal abnormalities observed with an increase in age. [20] However not just age, but also its combination with other factors such as consanguinity, are risk factors for CH with a lethal outcome.

In the present research, the authors examined the probable risk of mothers age to the risk of associated hydrocephalus with other severe anomalies, with regards to the lethal outcome of pregnancy. The search for such a correlation is intended to emphasise the physician’s attention to the prenatal diagnosis of certain patients in these age groups.

The results reported show that at a time when the number of women giving birth after the age of 35 for the first time significantly increases, maternal age should be considered a risk factor for the occurrence of CH. This possibility is increased when combined with other maternal or exogenous risk factors (incest, for example), and in the presence of associated malformations, such as aqueductal stenosis (stenosis of the aqueduct of Sylvius), polygyria, lissencephaly, and trisomies, which suggest an adverse pregnancy outcome.

— Distribution of congenital hydrocephalus by degree of consanguinity in the fetus.