Miscarriage, or fetal loss at < 24 weeks of gestation, is a common complication of pregnancy [1]. In Western countries such as the United States and the United Kingdom, miscarriage has been reported to occur in 11% to 22% of clinically recognized pregnancies [2]. In a survey of 468 pregnant women in Riyadh, Saudi Arabia, approximately one-fourth had a previous miscarriage [3]. Miscarriage risk factors have been studied extensively, with occasionally variable results; however, genetic defects are widely accepted as causing more than 50% of miscarriages [4-6]. Specific medical conditions including uterine abnormalities, thrombophilias, endocrine disorders, and autoimmune disorders are often cited but may be less clearly supported. For example, large prospective studies have not shown a significant association between thrombophilias and sporadic pregnancy loss [7]. Previous miscarriage and advanced maternal age increase the risk of miscarriage, with a substantially increased rate in women ≥ 35 years [7,8]. Emerging evidence supports a significant causative impact of overweight and obesity on miscarriage, which persisted after adjustment for maternal age [2,9,10]. Despite these associations, identifying the specific cause of a miscarriage is often elusive. Accordingly, public perceptions of the causes of miscarriage may be founded more on folklore than on fact, which may contribute to additional emotional trauma for a woman experiencing a miscarriage. Little is known about Saudi women’s experiences with and understanding of the causes of miscarriage. This information can be important for identifying healthcare needs and assuring proper support and education are provided for women who experience this common complication of pregnancy and pregnant women in general. Accordingly, the present authors performed a cross-sectional study to assess miscarriage perceptions and experiences of Saudi women attending the obstetrics and gynaecology clinics at King Abdulaziz University Hospital (KAUH) in Jeddah, Saudi Arabia.

The study was approved by the KAUH institutional review board. Married, divorced, or widowed Saudi women were recruited from women attending the KAUH obstetrics and gynaecology clinics. The survey instrument included some of the items contained in a recent online U.S. survey, [5] with adjustments made for cultural and other considerations. In addition to demographic information, participants were asked about their pregnancy and miscarriage histories. Women with more than one miscarriage were asked to provide information about their most recent miscarriage. Information was acquired on who was told about the miscarriage, the perceived level of support received, experience with negative feelings associated with the miscarriage, and whether a cause was identified. All participants were asked about their beliefs regarding the causes of miscarriage.

Personal reactions to a miscarriage were acquired on a Likert scale from 1 (strongly disagree) to 5 (strongly agree). Emotional effect of a miscarriage ranged from 1 (extremely upsetting, like the loss of a child) to 3 (moderately upsetting), and 5 (not upsetting; only an inconvenience). Desire to know the cause of a miscarriage if there was or was not something that could be done to prevent a subsequent miscarriage was captured on a 1 (strongly not like to know) to 5 (strongly like to know) scale, with 3 being “unsure.” Belief in potential causes of miscarriage were acquired as agree, disagree, or unsure. Study team members administered a pilot survey to 20 eligible and consenting women, which results were used to make minor data management revisions prior to open recruitment for the remainder of the sample. Selected clinic staff were trained by study team members to recruit eligible and agreeing women, administer the questionnaire in the waiting area, answer any questions, and submit the completed surveys to team members for data entry.

Summary data were prepared as proportions or means with standard deviations. However, pregnancies that were < 20 weeks at the time of the survey were not included in pregnancy summaries, as their miscarriage status was unknown at that time. Chi-square analysis explored differences between relevant proportions, with p < 0.05 indicating statistical significant. When appropriate, groups were collapsed for comparison (e.g., university education versus less than university education, and Likert strongly agree / agree and strongly disagree / disagree).

Table 1 — Women Wanting to Know the Cause of Miscarriage, n (%) 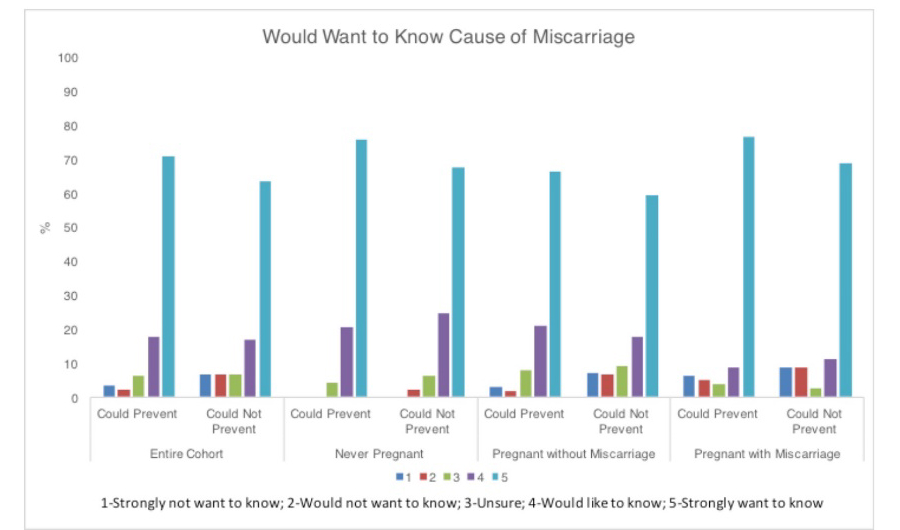 — Women wanting to know the cause of miscarriage. — What would a miscarriage mean?

All 81 respondents who had experienced a miscarriage revealed their loss to someone. Most told their husbands (97.5%), followed by their doctor or healthcare professional (91.4%), mother (79.0%), sister (51.9%), friend (49.4%), and father (45.7%). Most of these women agreed (21.3%) or strongly agreed (62.5%) that they received adequate emotional support from their husbands after their miscarriage. Other persons who were told of the miscarriage were considered to be similarly supportive (30.0% agreed, 56.3% strongly agreed). All but four (4.9%) participants received medical care for their miscarriage; however, the medical establishment was perceived as providing lesser emotional support (31.6% agreed, 34.2% strongly agreed) than others who were aware of the miscarriage.

Among the offered causes of miscarriage (Figure 3), a stressful event was the most accepted cause (72%), followed by destiny/fate (65%), long-term stress (64%), lifting (57%), and past abortion (57%). Approximately one-half (52%) agreed that fetal genetic abnormalities can result in a miscarriage, and this belief was the same in consanguineous marriages (57.6% agree) and non-consanguineous marriages (50.2% agree; p = 0.51). Past use of an intrauterine device (IUD) (38%) or birth control (34%) were believed to be able to cause a miscarriage by slightly over one-third of participants in the entire cohort. Thirty-five percent believed that moderate exercise was a cause of miscarriage. 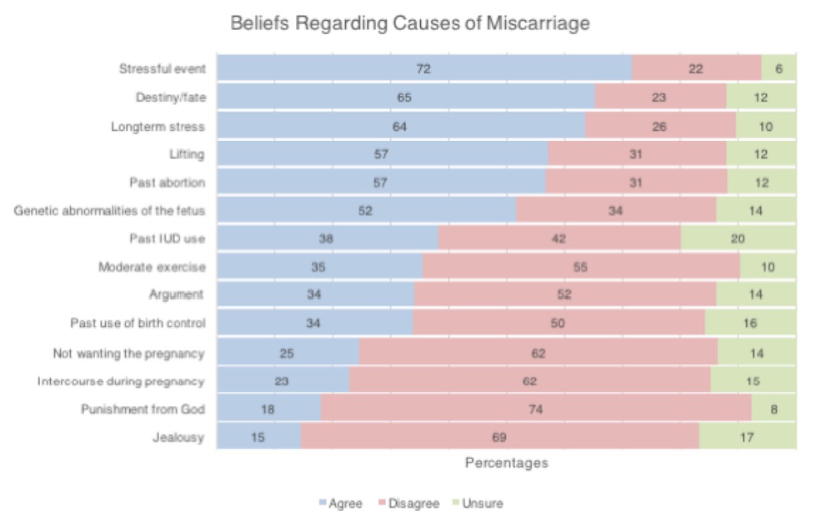 Results of the present survey increases the understanding of miscarriage perceptions in women and provide insight into experience with and knowledge about misncarriage, including beliefs about the causes of miscarriage, from Saudi women attending obstetrics and gynaecology clinics in a single hospital in Saudi Arabia. This study was based on a 2013 U.S. national online survey to assess participant beliefs about the causes of miscarriage, and to explore emotional experiences of persons who claimed a history of miscarriage [5]. In addition to the online source for participants, the Bardos et al. study differed from the present by including both men and women, and participants who were never married. Also there was a higher level of some form of university education (89%) in the Bardos et al. study [5]. Miscarriage experience in that study was collected on a partner basis; that is, a man completing the survey could answer questions about a miscarriage that his wife had experienced. Despite similarities between the survey instruments, valid comparisons between the present study and that of Bardos et al. [5] are hampered by the major differences in the populations sampled. In addition, the continuing debate concerning the quality of data acquired through the commercial Amazon Mechanical Turk platform used in that study suggests caution is warranted when comparing observations among similar participant groups. [11] However the present study used questionnaires administered by study staff.

A relationship between consanguinity and miscarriage may be expected, considering the prevalence of genetic causes of miscarriage, where over half of fetal losses are due to genetic disorders.[5] A case control study of 452 women in Saudi Arabia reported significantly more cases hospitalized for spontaneous abortion (< 25 weeks) were in consanguineous marriages (47.8%), compared with controls without a spontaneous abortion history who were hospitalized for a normal delivery (31.0%; p = 0.0001) [12]. High consanguinity rates are common in Saudi Arabia and other Arabic countries; a nation-wide diabetes prevalence study in Saudi Arabia found high consanguinity prevalence of 57.7% (28.4% first cousin, 14.6% second cousin, 15.2% distant relative) [13], while a study on pregnant women coming for a secondtrimester ultrasound in Jordan found a consanguinity rate of 21% [14]. In general, however, most studies report that fetal loss is not associated with consanguinity [15,16], which was reflected in the present study, where proportions of the respondents with miscarriage experience were similar whether they were in consanguineous (39.0%) or non-consanguineous (30.9%) marriages. Studies in Saudi Arabia on recurrent miscarriages have shown significant relations between consanguinity and chromosomal abnormalities [17,18].

In the Bardos et al. survey, most participants would want to know the cause of a miscarriage if the knowledge could (88%) or could not (78%) help prevent a recurrent miscarriage [5]. Similar proportions of the present sample expressed the same opinion (88%, 80%). Bardos et al. reported that fewer persons who knew the cause of the miscarriage believed they had done something wrong that resulted in the fetal loss; however, negative feelings and belief that something could have been done to prevent the miscarriage were not different in this participant subgroup [5]. In the present sample, only 17% of women were given a reason for their miscarriage. These women were less likely to believe they caused or could have prevented the miscarriage (35.7%), compared with women who were not given a reason for their miscarriage (52.2%; p = 0.260). Causes of first and second miscarriages are often not known, partially because they are not investigated [19]. Studies in the United Kingdom have shown that not knowing the miscarriage cause can sustain initial anxiety levels, while information about the cause can assist in lowering them [20,21].

The majority of earlier studies on negative feelings cannot be compared with our study due to different social cultural contexts and different study designs, for example qualitative research or use of special scoring scales specifically adapted for the context and topic (anxiety, depression, grief etc, ). It is however clear that negative feelings like grief, sadness, depression, guilt, self-blame, loss of baby, isolation, and devastating events are common after miscarriages and can last for months.[19,22-25]. For example, 96% of Irish women referred to a miscarriage clinic for support and counselling had a grief reaction, of which 21% was not resolved after one month [26]. After a missed abortion at 10-14 weeks of pregnancy anxiety and depression were found in 45% and 15% of English women, respectively, while they had a mean grieving score of 2.52 which is slightly higher than the score (2.23 on a scale of 1 to 5) found in death of a close relative [20]. This is similar with findings in the present study where 46.3% of participants indicated that a miscarriage would be extremely upsetting, similar to the loss of a child.

Most of the present participants with miscarriage reported receiving adequate support from husbands (83.8%) and others who were told of the miscarriage (86.3%), which is higher than the 74% reported for online US survey [5]. Fewer of the present participants reported receiving adequate support from the medical establishment (65.8%); however, the proportion is considerably greater than that reported in the U.S. study (45%) [5].

— Women wanting to know the cause of miscarriage.