Although its prevalence is not known accurately, vulvar vestibular papillomatosis (VVP) is rarely encountered in the literature and some publications state that its prevalence is around 1%. In clinical practice, it may be asymptomatic and discovered incidentally, and in some cases, accompanied by chronic pruritis and vulvar irritation. VVP is characterized by linearly symmetric pink, smooth or filiform papillae. Its clinical appearance has been mistaken for condyloma leading to unnecessary treatment. In this study, the authors reassessed and divided into four diagnostic groups the pathological preparations of the patients who presented to this hospital due to vulvar lesions or various vulvar conditions and underwent vulvar-vestibular biopsies. They aimed at documenting the prevalence of VVP in this hospital and its relation with HPV.

The study included 209 female patients who presented to this hospital between 2008 and 2018 due to various vulvar conditions and from whom biopsies were taken from vulvas for accurate diagnosis. Informed consent was received from the patients. Patients between the ages of 20-45 years were included in the study. The Hematoxylin-Eosin stained preparations of these patients that were being kept in the pathology archive were reassessed and regrouped under fibroepithelial polyp (FEP), condyloma acuminatum, VVP and other diagnoses. The HPV DNA results of the patients diagnosed with FEP and VVP were reviewed. The treatments administered to these patients were reviewed from the hospital system and recorded. Statistical analysis was performed using the Statistical Package for Social Sciences (SPSS) version 15. Descriptive statistics were calculated using the means, standard deviations, percentages, and cumulative percentages.

As a result of microscopic assessment of 209 cases, 76 cases were grouped under FEP, 46 cases under condyloma acuminatum, and 16 cases under VVP. The remaining cases included those that did not belong any of these three groups (Table 1). The mean age of the patients was 28 ± 5 years. The HPV DNA results that were obtained through hybrid capture method in the screening laboratory using concomitant and casual biopsies of the patients diagnosed with VVP showed no HPV positive results. The treatments administered to the patients included local treatments after biopsy, spontaneous monitoring, or ablative treatment methods.

VVP is considered as a variant of the normal anatomy of the vulva [1-4]. Some have named these lesions as “pseudocondylomata” and some others have named them differently as ‘hirsuties papillaris vulvae’, ‘hirsutoid papillomas of vulvae’, ‘vestibular microwarts’, ‘micropapillomatosis’ or ‘vulvar squamous papillomatosis’ [1,5]. These lesions are asymptomatic and characterized by small pinkish papillary bumps [6]. The present cases involved patients who presented to this hospital with complaints of itching and irritation.

VVP is characterized by asymptomatic, small papillary outgrowths, pink or mucous in color, localized in the vaginal region (Figures 1-3). Due to its wart-like structure, VVP is usually misdiagnosed leading to use of excessive and unnecessary treatment methods [6]. Its prevalence has been reported to be 1%, but in a prevalence study made in London, its prevalence was reported to be between 5% and 33% [3-5, 6]. In this series, the rate was approximately 7.6%. VVP is considered as the female version of the pearl-like penile papillae seen in men [2-4, 7]. These lesions are soft, symmetric, and papillomatous lesions around 1-2 mm in diameter; they are colored same as mucosa, connected to each other, and spread on labia minor and introitus in various degrees [1, 5]. VVP lesions generally extend separately down to each projection base and do not turn white when acetic acid is applied on them. Whereas vulvar warts turn white when 5% acetic acid is applied on them and filiform papillae tend to unite [7, 8]. Some authors state that prospective randomized studies are needed to be able to mention that VVP have no relationship with HPV [7]. It has been shown with polymerase chain reaction (PCR) or in situ hybridization that HPV infection does not cause VVP [9, 10]. The present authors also did not encounter any positive HPV DNA result in any of the cases in this series. Vestibular papillomas are benign lesions appearing around a fibrovascular core and are surrounded by squamous epithelium. Although these lesions resemble FEP, they are distinguished from them in that they show a vestibular localization, are single and/or multiple and do not show noticeable hyperkeratosis (11). Microscopically, VVP is characterized by an angiofibrotic base surrounded by non-keratinized squamous epithelium (Figures 2 and 3). 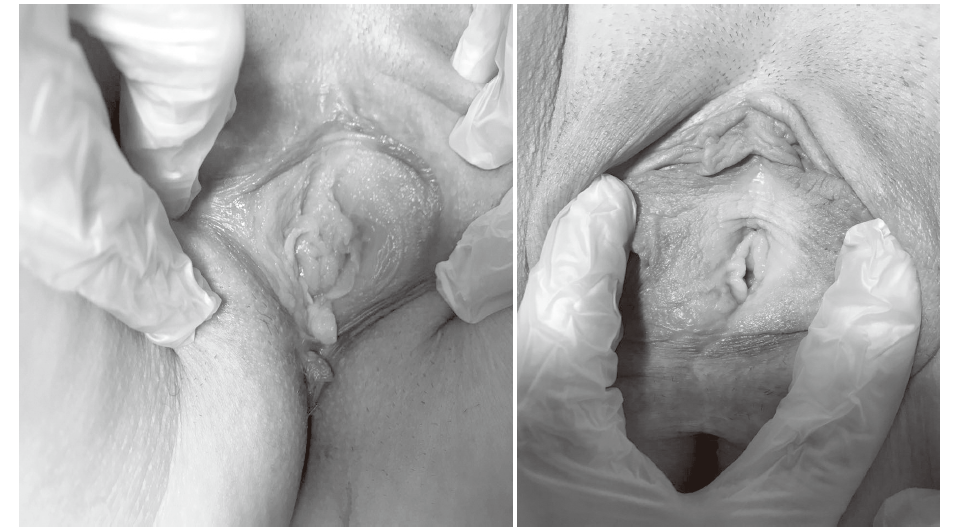 — Two examples of the patients who presented to this clinic and were diagnosed with VVP pathologically and clinically non-keratinized squamous epithelium (Figures 2 and 3). 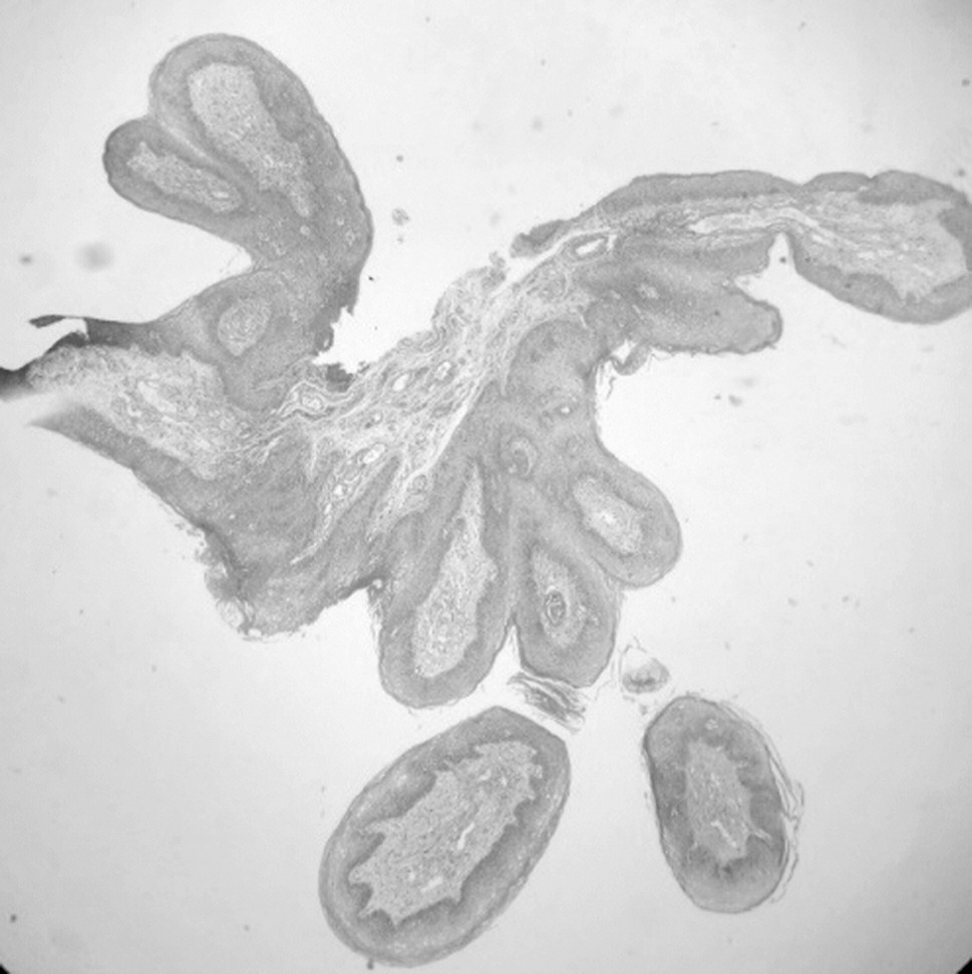 — No acanthosis or koilocytotic atypia is seen in the epithelium. There is mild lymphocytic inflammation under epithelium (H&E, ×200).

Epithelium is rich in glycogen in women in their reproductive period and a thin layer of keratin may be seen in them. A centrally localized vascular core is apparent. Generally, no inflammation is seen. The presence of glycogenrich epithelium may be confused with HPV, but absence of koilocytosis and nuclear atypia assists in its differential diagnosis. Dyskeratosis, parabasal hyperplasia, and multinucleation are observed in HPV infections. Such findings are not present in the glycogenic epithelium of VVP [10,12-15].

VVP is a benign clinical condition with no definite prevalence. The need for its treatment generally arises due to the irritating symptoms it causes in the vulva. Its clinical appearance is similar to that of vulvar condyloma. An effective differential diagnosis in these cases will prevent patients from receiving unnecessary HPV and other aggressive treatments. Therefore, presence of VVP should be considered in vestibular papillary lesions of the vulva.

— Two examples of the patients who presented to this clinic and were diagnosed with VVP pathologically and clinically non-keratinized squamous epithelium (Figures 2 and 3).