Menopause is defined as a rapid and progressive decrease in estradiol, that a form of estrogen. The estrogen decrease associated with the menopause is the main reason of the changes in bone remodeling parameters that lie behind that the disorder known as postmenopausal osteoporosis [1,2].

Pineal gland is a endocrine organ which secrets melatonin (MLT). Pineal gland influence a lot of organ systems. Bone is one of them and plays a great role in the organisation of bone metabolism. The amount of MLT reduces with age. So MLT requirement in age-related disease has long been doubted as osteoporosis. Bone marrow cells have high amounts of MLT and they produce the mRNA coding hidroxy-o-methyltransferase which is the latest enzyme in the MLT synthesis [1]. In another study using normal human bone cells and human osteoblastic cell lines, MLT surprisingly and dose-addicted augmented cell proliferation by two-fold [2].

The correlation between alterations in amounts of 24-hour profile of serum MLT and circadian metabolism of type 1 collagen in postmenopausal women was measured by Ostrawska et al. and they discovered a negative relationship between MLT and collagen metabolism indicators. Supposedly the declined melatonin levels may be an risk factor for osteoporosis [7]. Ladiesky et al. firstly showed that MLT could be reason for in vivo decrease in bone mineral loss in ovariectomized (OVX) rats.They showed that after surgery, bone mineral density (BMD) amount decreased and this decrease was not altered by MLT administration. The results support that MLT regulates bone remodelling after OVX and may require sufficient concentrations of estradiol [8]. Ostrawska et al. studied whether pinealectomy (PX) and MLT administration could alter OVX rats. They showed that PX facilitated bone remodelling factors while MLT partially decreased the effect. Koyama et al. studied whether MLT could increase bone mass in mice and they found that MLT administered for four weeks positively increased BMD by 36%. This treatment decreased bone resorption parameters but did not altered bone formation parameters [9]. Another study examined the effect of MLT in bone metabolism in OVX rats while taking or not estradiol or not and concluded that efficacy of estradiol treatment in OVX rats was improved by MLT administration [10].

The aim of this study was to define the pineal gland functions and MLT secretion in menopause is important factor for the osteoporosis. Another aim was to show that MLT administration could reverse the effect of OVX and PX on bone metabolism.This depends on MLT as being an anti-aging hormone and organizer of calcium homeostasis.

A total of 49 young Wistar-Albino adult female rats were included in the study, weighing 200-250 grams. Rats remained in cages with a temperature of 20-22℃, air humidity of 80-85%, and organised light-dark cycle (LD 12:12; light from 7 am to 7 pm). Rats were fed using standard provender and water ad libitum. The permission for the animal tests and experiments was given by the Bioethical Board of Inonu University Medical faculty.

PX was performed according to Kuzsack and Rodin. OVX was performed under ketamine (50 mg/kg) and xylazine HCl (10 mg/kg) anesthesia, using the dorsal approach. Rats in the sham operation group underwent a surgical procedure similar to the other groups, but the ovaries were not removed. Adequate precautions were taken to minimize pain or discomfort with respect to principles and procedures outlined in European Communities Council Directives (86/609/ECC).

Melatonin was included in a 96% ethanol solvent. Fresh solution was made twice weekly. MLT was administered daily at 5 mg/kg/day in the aforementioned solvent intraperitoneally. MLT was also administered for three weeks, two months after PX, and 35 days after OVX. Rats were administered the MLT liquor daily between 17.00 and 18.00 hours.

In the all rats, BMD of the femur was taken with dual-energy X-ray absorptiometry (DEXA) and results were measured by the same examiner. DEXA equipment works with switch pulsed stable dual-energy radiation with 70 kV and 140 kV. Subregion analysis software was used to analyze of the all regions. BMD was used, in g/cm2. Femur was marked up at a 3-mm thickness. The BMD of femur was named as proximal 1/3 (R2), middle 1/3 (R1), distal 1/3 (R3), and total (R4). BMD was determined at the time of sacrifice.(Figure 1) 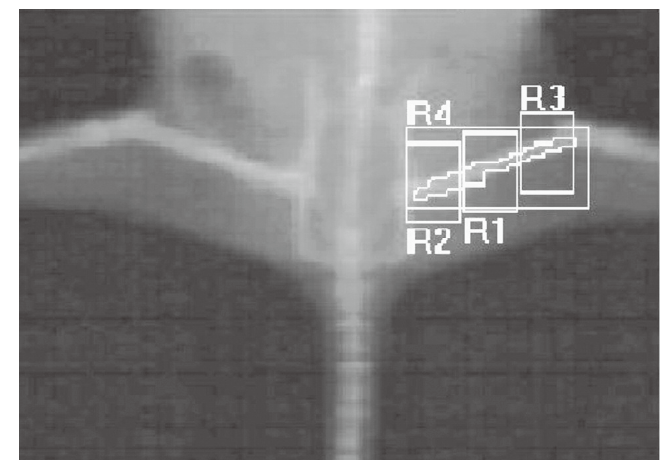 A comparison of the results of the different groups was measured with use of the Kruskal-Wallis analysis of variance and posthoc multiple comparison test. The results are shown in the text as means ± STD. For all comparisons, statistical significance was defined at p < 0.05.

Our study aimed to determining the effects of exogenous melatonin administration on bone mineral density in osteoporosis (with OVX) and aging model (with PX and OVX). Table 1 and Figure 2 show femoral BMD values for the different groups. BMD was expressed as the mean of the values obtained for the femur. PX causes a decline in MLT level which subsequently causes an increase in GnRH and estrogen. GnRH is an apoptotic agent [11; on the contrary, estrogen is a known cell protector [11]. These neuroendocrine hormones may cancel each others’ effects on cell apoptosis. Exogenous MLT administration may result in a GnRH-induced increase with FSH, LH, and estrogen secretion [12-14]. Another reasonable possibility is that MLT is affected directly by acting on the hypothalamic functions essential for the inhibitory regulation of GnRH [15,16]. Only in PX group, BMD was significantly higher at R3 subregion. However there was no change in BMD other subregions (R1, R2, R4) in PX rats. Compared with sham group, while PX+MLT group had higher BMD value at R3 subregion, there was no change in other subregions. Despite high levels of estrogen in the acute stage, MLT withdrawal in chronic stage increase apoptotic cell death. PX completes an antioxidant effect of pineal gland and increase cell death, resulting in different BMD values at different regions. Recent studies reported that reactive oxygen radicals play a role in the beginning of cell death [17,18]. After PX, if osteoblasts do not contribute enough reaction to oxidative stress, BMD values are not preserved.

PX group had positive increase in BMD at R3 subregion and this increase was not cancelled by exogenous MLT administration. Postulating that endogen MLT can be more important than exogenous MLT on osteoblasts, this may be due to postreceptor modulation.

Positive increase in BMD was seen in PX group at R3 subregion, not preserved by OVX. Compared with PX, PX+OVX group had lower BMD values. A hypothesis is that there is a positive effect of PX on BMD values depending on estrogen environment. With exogenous MLT administration, there is no change in BMD values. This finding indicated the effect of MLT on how much estrogen is important.

A recent study assessed the action of MLT on bone metabolism with or without estrogen in OVX rats. Higher BMD values were found in the group that were given both estrogen and MLT [10]. Similarly in the present study, BMD was higher in the group in which the ovaries were preserved than in the OVX group.

The present study is first that examined the MLT effect on BMD after PX. After PX, estrogen level increased in circulation [19]. Other supporting findings indicate that circulating estrogens increased in PX rats. Teixeira et al. observed that the endometrium of rats undergoing PX presented with hyperplasia, which was antagonized with the use of MLT [19]. On the other hand, the effects that resulted by the removal of the pineal gland cannot be antagonized by the exogenous replacement of the gland’s MLT product. The integrity of the gland and the presence of endogenous MLT seem to be essential to maintain ovarian cells. GnRH and estrogen reversed the cell protector effects of each other. Similarly in the present study, the authors found that BMD significantly increased in PX rats. This is a result of abolished inhibitory effect of MLT on gonadotropins and increased estrogen levels in circulation.

In summary, MLT deprivation indirectly induces apoptotic cell death in the ovaries of PX rats. This apoptosis cannot be reversed by exogenous MLT. The present results suggests that with aging, a reduction in the pineal gland functions may be a risk factor for osteoporosis. After OVX, disruption of bone remodelling could be prevented in rats by administering pharmacological amounts of MLT, however further studies are needed to assess MLT use during menopause.