Ectopic pregnancy refers to the implantation of a viable ovum outside the uterine corpus. Heterotopic pregnancy (HP) is defined as the simultaneous presence of intrauterine and extrauterine pregnancy. In cases of three embryos detected, the situation is defined as heterotopic triplet pregnancy (HTP). It was considered an exceptionally rare situation with a frequency of 1:30,000 in spontaneous pregnancies [1]. During the last decades, the increased use of assisted reproductive techniques (ART) in infertile couples and the higher incidence of pelvic inflammatory disease (PID), resulting in tubal damage, attributed to its impressive increase up to 1:100 although its true incidence is not exactly known [2]. Herein, the authors report a case of an HTP after in vitro fertilization (IVF) and intracytoplasmatic sperm injection (ICSI) complicated by ovarian hyperstimulation syndrome (OHSS) and fetal demise of the second twin. This potentially life threatening situation remains a diagnostic and treating challenge especially in cases where obstetrical complications co-exist.

A 38-year-old (gravid 4, para 0) was referred to the present department from a regional hospital at 8+2 weeks of gestation with the diagnosis of OHSS.

The couple had infertility due to oligoasthenospermia and the woman underwent her second attempt for IVF. Nine mature eggs were retrieved and ICSI was performed in four eggs. Three suitable embryos at the stage of four cells were implanted. From the obstetrical history the authors noted two missed abortions in the first trimester of pregnancy. Another pregnancy ended in spontaneous abortion due to cervical incompetence at 21 weeks of gestation.

On admission, the patient was in stable condition with normal temperature 36℃, pulse rate 89/minute, blood pressure 100/60 mm Hg, hematocrit: 30.4%, hemoglobin: 9.8 g/dl, white blood cell count 19700/Ul, and platelet count 207 k/Ml. Prothrombin (PT) 11.17 seconds, activated partial thromboplastin time (APTT) 24.19 seconds, and liver enzymes were within normal range. Total proteins and albumin were low while, fibrinogen 432 mg/dl (180-350), D-Dimers 10.82 (-0.5mg/l), and C-reactive protein 2.61 mg/dl (0.0-0.8 mg/ dl) were elevated. Physical examination revealed diffuse abdominal and rebound tenderness. Ultrasound examination showed a dichorionic twin pregnancy with one viable embryo (Figure 1). No heart rate was detected on the second twin. An intramural fibroid measuring 2.9×2.6 mm was also noted. The suspicion of an ectopic gestational sac (Figure 2) was also established during the scan, although the peritoneal cavity and the pouch of Douglas were full of fluid and the ovaries were enlarged with the typical view of ovarian hyperstimulation syndrome (Figure 3). A few hours later the patient was still in good condition with no change in her second laboratory results, however she was informed about the confronted dilemma of the presence of two serous conditions (OHSS and ectopic pregnancy). After consent form, the pregnant woman was transferred to the operating theater where an exploratory laparotomy was performed under regional (spinal) anesthesia. Diagnostic laparoscopy is considered a contraindication in cases of OHSS and it was excluded. Hemoperitoneum with a ruptured left tubal pregnancy was noted and left salpingectomy was performed (Figure 4). Histopathological examination verified the initial diagnosis. The patient received blood and plasma transfusion, recovered gradually due to OHSS, and was discharged on the eighth day in good condition. At 13 weeks of gestation, she underwent the first trimester screening test for Down syndrome (nuchal translucency) and cervical cerclage. Although discussed but not suggested, the patient decided to use vaginal progesterone 200 mg once a day. At 22 weeks of gestation, she underwent the second trimester scan and the non-invasive blood test for chromosomal abnormalities. At 30 weeks of gestation she was re-admitted due to threatened preterm labor. At 36+1 weeks of gestation a cesarean section was performed due to cervical effacement and a normal female neonate of 1,980 grams was born. One year follow up of the neonate showed normal physical and mental development. — Transvaginal ultrasound showing the intrauterine pregnancy with the viable twin. — The mass near the ovary that established the suspicion of an ectopic gestational sac. — The typical sonographic view of OHSS. 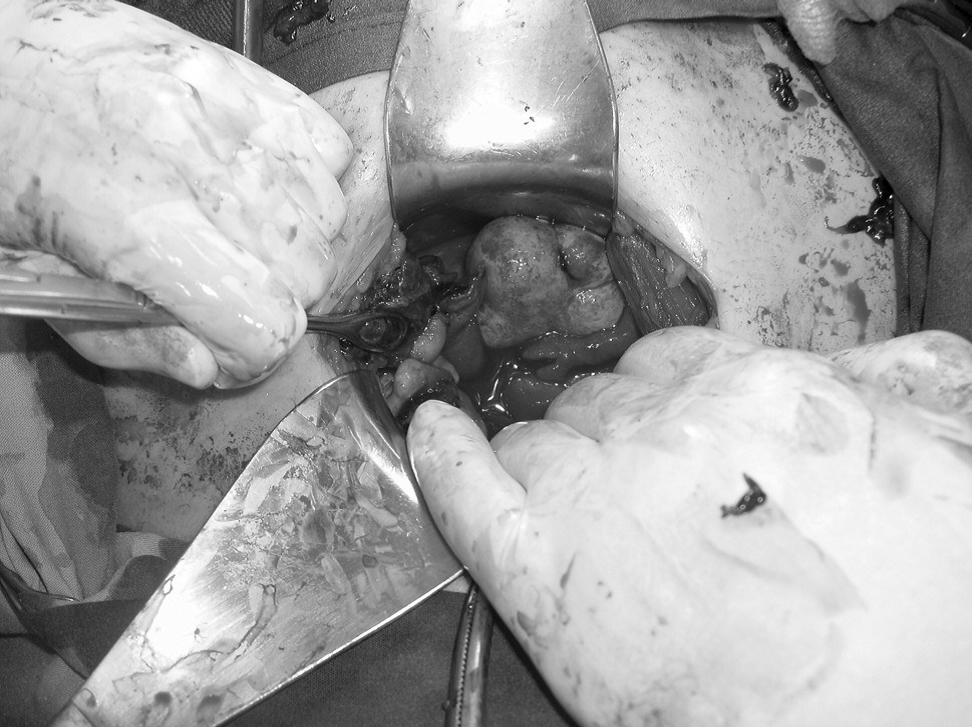 — Hemoperitoneum with a ruptured left tubal pregnancy and the presence of the hyperstimulated left ovary.

The incidence of HP formerly considered to be rare, continues to be so, but is increasing steadily in recent years. The same applies also for HTP. It is remarkable that the first case was reported in the literature in 1991 by Goldman et al. [3]. Ηeterotopic triplets should be considered a part of the ectopic-heterotopic medical condition, however diagnosis and treatment of HTP appears difficult and peculiar.

In general, the most common sites of HP in descending order occur at the fallopian tube, the cornu, the cesarean scar, the cervix, and the abdomen [4]. It is reported that approximately 70% of HTP are diagnosed between five and eight weeks of gestation, 20% are diagnosed between nine and ten weeks, and the remaining 10% are diagnosed after 11 weeks [5]. Tubal cases tend to be diagnosed earlier because the confined space results in earlier pain or rupture.

Factors predisposing to HP are similar to those predisposing to ectopic pregnancy, such as: a large number of transferred embryos, embryo transfer near the uterine horn, excessive pressure on the syringe and deep insertion of the catheter during transfer, the quality of embryos, the use of gonadotropins, the amount of fluid used as media for the embryos, and also adhesions related to endometriosis and PID [6,7].

The diagnosis of HP is challenging. Serial β-hCG levels are not useful due to the concomitant intrauterine pregnancy. Transvaginal ultrasound is the imaging modality of choice for the diagnosis of tubal and non-tubal HPs, however it continuous to have low sensitivity because it is often missed or overlooked [8]. Li et al. in a retrospective study set certain sonographic criteria so as to diagnose HP using TVS, even if a visible intrauterine gestational sac was observed. These criteria were (i) an inhomogenous adnexal mass, (ii) an empty extrauterine gestational sac seen as a hyperechoic ring, (iii) a yolk sac, and/or a fetal pole with or without cardiac activity in an extra-uterine sac. The sensitivity and specificity of TVS for the detection of HP in this study was reported to be 92.4% and 100%, respectively [9].

The diagnosis of HP is becoming more complicated in cases of ruptured ones associated with OHSS. Both medical conditions could be associated with hypotension, tachycardia, abdominal pain, and free fluid in the abdominal cavity with the simultaneous presence of an intrauterine pregnancy. Ruptured corpus luteum could also be misdiagnosed as HP since both conditions may exhibit the “ring fire” sign on ultrasound. On the contrary, women with OHSS usually have normal hemoglobin and high hematocrit and enlarged ovaries [8,10].

The management of HTP aims to remove the ectopic pregnancy without disturbing the viable intrauterine embryo or embryos. Currently, there is no consensus on the treatment of HTP and the majority of data derive from case reports. Treatment depends on the gestational age at diagnosis, the clinical status of the patient, the site of the ectopic implantation, and the experience of the treating physician. HP can be treated by a conservative or surgical approach. Laparotomy and removal of the ectopic gestation is the preferred technique in ruptured cases and in hemodynamically unstable patients. Laparoscopic approach could be considered when there are no contraindications. Salpingectomy, is preferable for tubal pregnancy in patients with uncontrolled bleeding or extensive tubal damage. Salpingostomy, is indicated when the patient is stable, when there is an unruptured ectopic sac < 5 cm, or when the contralateral tube is absent or damaged or the patient strongly wishes to conserve fertility [11,12].

Conservative treatment requires early diagnosis. Agents like methotrexate (MTX), potassium chloride (KCL), and hyperosmolar glucose could be used. The use of MTX with a viable pregnancy is contraindicated as the drug could cause miscarriage or congenital malformations. Sonographically guided local injection of KCL into the heart of the ectopic fetus can induce cardiac asystole. Hyperosmolar glucose could also be injected into the gestational sac causing local dehydration, necrosis, and resolution of the trophoblastic tissue. Cornual and interstitial pregnancies can be treated by surgical excision or ultrasound guided aspiration and injection of KCL. Cervical HP could be treated by ultrasound-guided aspiration with cervical sutures, intracardiac injection of KCL, vacuum aspiration after ligation of the descending cervical branches of the uterine arteries, electrodessication, and hysteroscopic resection. In cases of ovarian ectopic pregnancy laparoscopic wedge resection or ipsilateral oophorectomy is the treatment choice [2,13].

The present case report confirms the importance of the early diagnosis of HP for a successful obstetrical outcome. Additionally, it emphasizes the implication of large number of embryos transferred in utero contrary to the current guidelines. Searching the literature, the authors found only one similar report with heterotopic triplets complicated by OHSS following IVF, where it is noted that enlarged ovaries and free fluid in the abdominal cavity could mask early accurate diagnosis [8]. In the present case, two parameters led us to early diagnosis although the patient was referred as OHSS syndrome in a stable situation, the relatively low hematocrit and the mass noticed in the left adnexa after thorough vaginal ultrasound. Another case referred as OHSS in a stable condition with low hematocrit and a sac in the right adnexa is also reported and treated [19].

Based on the present authors’ experience, they suggest serial early vaginal scans in all pregnancies induced by ART every week, starting from the 5th until the 9-10th week of gestation. Furthermore, they strongly agree with Mustafa et al. who noticed that in cases of pregnancy and ART the first thought coming in mind should be “think ectopic” [19] and they would further add “think heterotopic”. Obstetrical complications treatment strategy if present, should take into account clinicians experience and woman’s preferences.

— Transvaginal ultrasound showing the intrauterine pregnancy with the viable twin.