Angiogenesis is associated with follicular development and oocyte maturation [7]. Vascular endothelial growth factor A, usually referred to as VEGF, is a mitogen related to increased angiogenesis [8]. Several reports have described the presence of VEGF in follicular fluid (FF) [7,9]. Soluble fms-like tyrosine kinase-1 (sFlt-1) is a soluble receptor of VEGF, and acts as an inhibitor of VEGF bioactivity, and it has been found in FF [10].

The authors examined the levels of VEGF, angiotensin II, and their receptors in FF and GL cells to elucidate the mechanisms of oocyte maturation disorders in endometriosis patients underwent cystectomy.

For controlled ovarian stimulation, the authors used multiple protocols that consisted of gonadotropin, clomifen citrate, aromatase inhibitor, and gonadotropin releasing hormone (GnRH) antagonist. The protocols including GnRH agonist such as the long protocol and the short protocol were excluded because of the pathophysiology of endometriosis. When a follicle reached a diameter of more than 18 mm, a GnRH agonist or human chorionic gonadotropin (hCG) was administered to induce final oocyte maturation. Thirty-five hours after the GnRH agonist or HCG administration, transvaginal oocyte retrieval was performed.

FF samples were collected after identification of the oocyte cumulus complex, centrifuged to remove the cellular components, and stored at -80℃ until analysis. The VEGF, sFlt-1, and angiotensin II concentrations were determined by ELISA. All samples were run in duplicate.

GL cells were collected from FF and purified immediately after egg retrieval. GL cells were lightly centrifuged after removal of the oocyte. The cells were washed in isolation medium twice, and separated from red blood cells using a 50% Percoll gradient. Total RNA was isolated from GL cells using a TRIZOL Reagent. cDNA was synthesized from total RNA using a high capacity cDNA Reverse Transcription Kit. The reaction mix (20 µl) containing 500 ng of the total RNA was incubated at 25℃ for ten minutes, at 37℃ for 120 minutes, and at 85℃ for five seconds for reverse transcriptase inactivation. Quantitative real-time PCR was carried out with cDNA using a 7500 Real Time PCR System. The primer sequence of the AT1 receptor was AGC CAG CGT CAG TTT CAA CC for the forward sequence and ACA AGC ATT GTG CGT CGA AG for the reverse sequence [15]. The primer sequence of the AT2 receptor was AGA ACA GGA TAA CCC GTG ACC for the forward sequence and AGG ATG GCA AAA GGA AGT GC for the reverse sequence [15]. For normalization, the expression of β-actin mRNA was also quantified. Each PCR well received iQ SYBR Green Supermix, and amplification was performed under the following conditions: 95℃ for three minutes, 45 cycles of 95℃ for 15 seconds, and 60℃ (for AT1 receptor) and 59℃ (for AT2 receptor) for one minute. All assays were performed in triplicate.

The qRT-PCR data were analyzed using the comparative CT method, as previously described [15,16]. The difference in cycle time (ΔCT) was determined as the difference between the number of cycles required for the amplification of β actin. The authors then obtained ΔΔCT by finding the difference between groups. The results were expressed as the fold difference (2-ΔΔCt) [17] compared with the value for the control.

The authors counted the number of oocytes retrieved in cycles obtained GL cells. They compared the frequency of immature oocytes in both groups after the model of a precedent [18]. 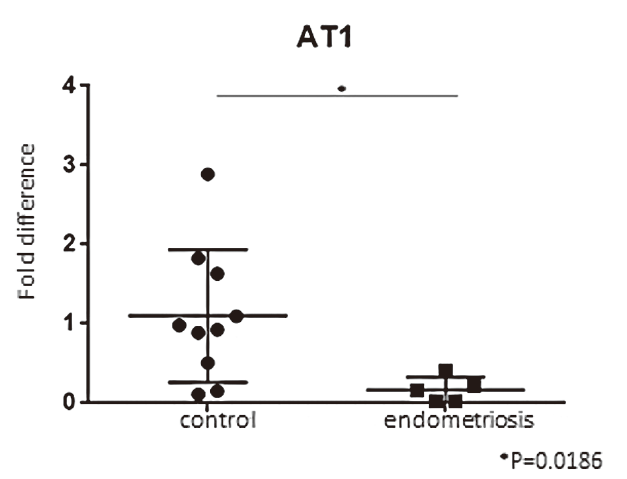 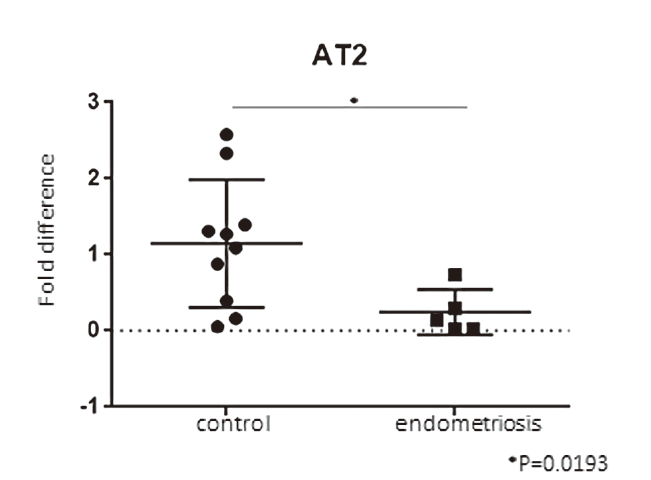 It has been reported that VEGF may play an important role in follicular growth and development [19]. Nishigaki et al. reported that the concentrations of VEGF in FF with diameter ≥ 15 mm were significantly higher than those in FF with a diameter ≤ 14 mm [20]. Monteleone et al. estimated perifollicular vascularity through power Doppler blood flow and graded follicles by percentage of follicular circumference in which blood flow was identified. They reported that the levels of VEGF in FF of high-grade follicles were significantly higher than the levels of low-grade follicles [21]. In natural cycles of IVF treatment, the VEGF concentrations in FF of endometriosis patients were lower than that of non-endometriosis patients [22]. On the other hand, the VEGF concentrations in FF correlated with the total number of gonadotropin [23,24]. These reports supported the theory that there are no differences between the VEGF concentrations in FF of endometriosis patients and that of controls undergoing ovarian stimulations. SFlt-1 acts as a negative modulator for the bioactivity of VEGF [25]. Gruemmer et al. reported that FF and granulosa cells control VEGF availability by downregulation of the sFlt-1 leading to an increase of bioactive VEGF [10]. In the present study, there were no differences between the VEGF and sFlt-1 concentrations in FF of endometriotic patients and those of the control group; thus, VEGF may not affect folliculogenesis disorder or increase the number of immature oocytes in endometriotic patients who undergo ovarian surgery before ovarian stimulations. In both groups, angiotensin II was present in high concentrations in FF; however, the expression levels of angiotensin II receptors mRNA were significantly lower in the endometriotic group than in the control group. Angiotensin II acts in an antagonistic way by binding to different receptors. The key functions of the AT1 receptor are to promote angiogenesis, increase vascular resistance, and cell growth and development like an anti-apoptotic effect [14,26]. Conversely, the key functions of the AT2 receptor include vasodilation and inhibition of cell growth [27]. In GL cells, angiotensin II induces apoptosis via AT2 receptors [28]. Changes in granulosa cell cycle kinetics have been reported to possibly be responsible for impaired follicle growth and oocyte maturation in endometriotic patients [29], and there is a proper balance between proliferation and apoptosis in GL cells for obtaining a fully competent oocyte [14]. For endometriotic patients that underwent ovarian surgery, the number of immature oocytes increased and stronger ovarian stimulation was necessary to obtain MII oocytes [6]. The expression of angiotensin II receptors mRNA of endometriosis with ovarian surgery was low; thus, surgery for endometrioma may induce the collapse of the proper balance of GL cell cycles and may affect folliculogenesis and oocyte maturation in endometriotic patients with controlled ovarian stimulation.