Fetal volvulus is a rare, life-threatening condition that requires emergency surgical treatment. Regarding diagnosis, Ultrasound sonography (US) is useful, whereas the utility of other specific findings on cardiotogography (CTG) is unknown. Here the authors report a case of fetal primary volvulus which showed abnormal fetal heart rate (FHR) patterns on CTG.

A healthy, multiparous, 29-year-old woman was referred to our Obstetric Unit at 31 weeks of gestation because of abnormal fetal US findings. The mother reported feeling reduced fetal movements for six hours. Our US examination of the fetus showed that the small bowel was dilated to 19 mm, with a thickened and hyperechogenic intestinal wall, and a moderate amount of ascites (Figure 1). The amniotic fluid level was adequate, however the fetus showed neither breathing movements nor body motion for 20 minutes. The blood flow speed in the middle cerebral artery (MCA) was 61.7 cm/second. The CTG showed decreased FHR variability and an absence of FHR acceleration for at least two hours (Figure 2). Recurrent, non-periodic decelerations were also observed. Based on the abnormal FHR pattern, non-reassuring fetal status was confirmed and an immediate caesarian section was performed. A female newborn was delivered (1,515 grams, appropriate for gestational age; Apgar Scores at one and five minutes: 5 and 7, respectively; umbilical artery pH: 7.304, pCO2: 46.1 mmHg, pO2: 16.2 mmHg, base excess; -3.8 mmol). The newborn exhibited abdominal distension and US showed a dilated small bowel. The newborn’s hemoglobin level was 9.6 g/dl. Emergency laparotomy was performed on the neonate. A moderate amount of ascites was observed, as well as a small intestinal volvulus without malrotation (Figure 3). The volvulus was necrotic and the small intestine was resected from 65 cm distal to the ligament of Treitz to 2 cm distal to the ileal end. Colostomy was also performed. Pathological findings showed ischemic necrosis of the small intestine. The infant’s stoma was closed 56 days after surgery and she was discharged three months after the operation, without any complications. 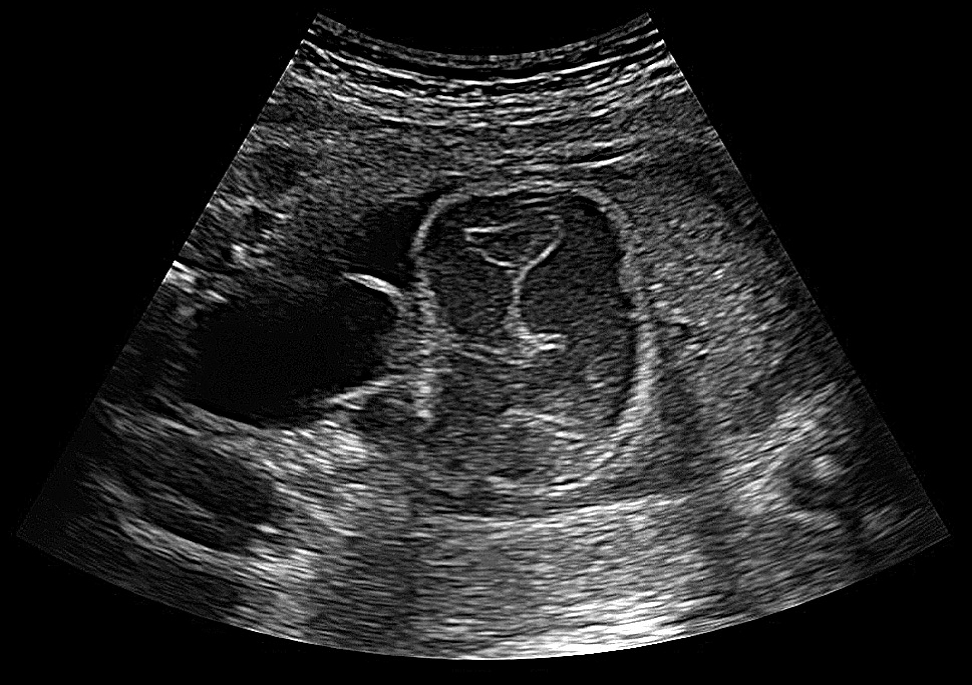 — Ultrasound sonography shows a fetus with a dilated small bowel. It also shows a thickened and hyperechogenic intestinal wall and a moderate amount of ascites.

— CTG shows decreased FHR variability and an absence of FHR acceleration of at least two hours. — A small intestinal volvulus without malrotation is observed (arrow).

The diagnosis of fetal volvulus is given by its characteristic US findings. Dilated loops of bowel were the first such findings to be reported in 1983 [2]. Several pathognomonic signs have been noted. One of well known findings is the “whirlpool sign”, that reflects bowel loops with accompanying mesentery and vessels. Other finding is the “coffee bean sign”, that reflects distension of a short segment of the small bowel [3].

FHR monitoring is commonly used to estimate fetal condition during the antepartum and intrapartum periods [4]. Traditionally, the evaluation of FHR variability has been considered to be useful, because FHR variability indicates that the fetus is not undergoing acute cerebral hypoxia, even in the presence of significant FHR decelerations [5]. With regards to fetal volvulus, the mechanisms of abnormal FHR patterns, including decreased FHR variability, are unknown, however, two causes have been hypothesized: 1) loss of circulating blood volume and anemia caused by tense hemoperitoneum [6], and 2) change of vagal nerve output due to increased abdominal pressure [7]. Previous case of fetal gastroschisis reported that abnormal FHR patterns may appear because of variations in vagal output caused by the mechanical effects of gut herniation [7]. In the present case, both mechanisms were thought to be related to abnormal FHR patterns, since the newborn showed signs of anemia and a moderate amount of ascites.

— Ultrasound sonography shows a fetus with a dilated small bowel. It also shows a thickened and hyperechogenic intestinal wall and a moderate amount of ascites.