The presence of an intravaginal foreign body corresponds to more than 10% of vaginal discharge bleeding in teenagers and is responsible for 4% of doctor’s appointments at this age. Its main cause is sexual abuse, followed by behavioral disturbance [1,2].

A 15-year-old drug addicted teenager sought out medical services at the Santa Casa Hospital in Belo Horizonte, complaining of abdominal pain associated with dysuria and a foul smelling vaginal discharge, which had lasted two years. During this time, she lost 10 kg. These manifestations appeared after sexual abuse, which the patient was unable to report appropriately, as it had occurred when she was in an alcoholic stupor. During physical examination, the abdomen was painful to palpitation in the hypogastric region, where a rigid mass was noticed. Through a vaginal touch, a foreign body, with a hollow cylindrical body of 2.5 cm in diameter, was identified and confirmed by speculum examination. The ultrasonographic examination confirmed the endovaginal foreign body and revealed a thickening of the uterine tubes. Since the introduction of the foreign body, the patient has been treated for recurrent urinary infections and chronic salpingitis by several physicians, who had not performed a proper examination.

Under spinal anaesthesia and after the bladder catheterization (only peroperative), the foreign body was completely removed from the vagina. The object was identified as an aerosol bottle cap. No injury was caused to the vagina, urethra, or uterus by the foreign body or its removal. (Figure 1). The patient was treated with 400 mg of ciprofloxacin every 12 hours, together with 600 mg of clindamycin every eight hours for seven days, counting from the immediate preoperative period. The postoperative evolution showed no evidence of intercurrent symptoms, and the patient was discharged on the seventh day upon having completed antibiotic therapy. During one year of outpatient follow-up, no complications or new infectious episodes were reported. 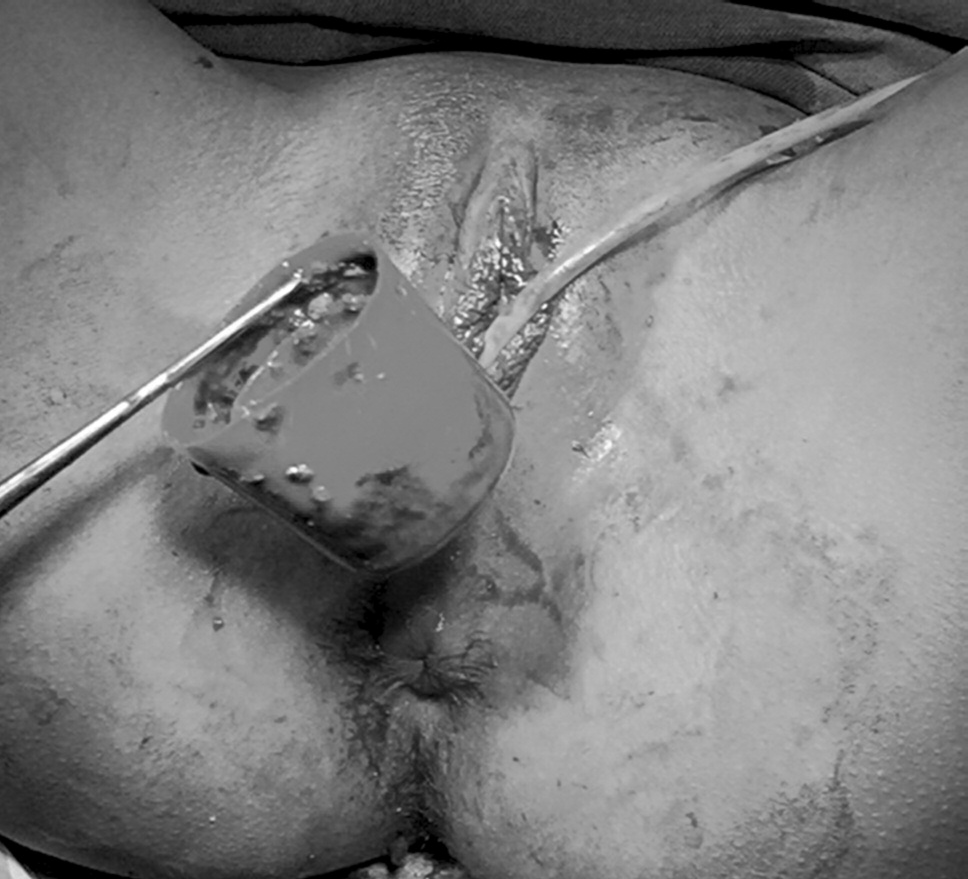 No innovation was introduced in propedeutics or treatment of this case to be submitted to ethics committee. Informed consent was obtained from the patient in written for the publication of her retained and removed intravaginal foreign body.

Approximately 4% of all pre-adolescents make gynecological complaints. Vaginal discharge at puberty can be physiological. Trauma from sexual abuse and foreign bodies should be suspected in all cases, regardless of the reports given by the patient and his/her relatives [11].

Injuries due to intravaginal foreign bodies are the cause of up to 10% of all vaginal injuries in this age range. These injuries occur with bloody vaginal discharge accompanied by local and pelvic pain [3,11-13]. A detailed physical examination detects the foreign body. Image examinations, such as ultrasound, pelvic radiography, tomography, and MRI are used to measure the foreign body and indicate its relationship with the structures of the region, as well as other local disorders, which may or may not be caused by the foreign body [11-14].

A neglected intravaginal foreign body can provokes ischemia or necrosis due to pressure and an ulcer with vaginal perforation, causing vesicovaginal and retovaginal fistulas [1,12,13,15-18]. The trauma also leads to uterine cervical bleeding, endometriosis, salpingitis, urethritis, and pelvic abscess. After removing the foreign body, a patient may develop chronic vaginitis, endometritis, and salpingitis, with consequent fibrosis and stenoses of the vaginal, uterine, and tubal regions, culminating in infertility [11,19-21].

Intravaginal foreign body’s treatment is its total removal, under blocked anesthesia and with utmost surgical care in order to ensure not to injury the vagina and urethra, which could further complicate the situation [12,13,19-21].

This report highlights that the patient suffered a physical aggression at the age of 13 years and for two years had doctor’s appointments with various doctors, including gynecologists. Each time, she was treated with antibiotics and received advice on general hygiene, without being properly examined by the professionals. In this case, the vaginal touch would have easily revealed the foreign body, avoiding the extensive suffering and the risk of more serious complications, which, sometimes, can become definitive. The foreign body was removed delicately, followed by surgical principles of strict antisepsis and antibiotic therapy to prevent postoperative complications.