Patient, a 34-year-old female, with 40 days of amenorrhea, complained of pain in the lower abdomen, together with dark blood discharge during the prior two days. The doctor of the local hospital diagnosed the patient with enteritis and prescribed oral antibiotics. Since the pain continued, the patient returned to the hospital and underwent an ultrasound which showed an adnexal mass. A pregnancy test was also positive. The diagnosis of an ectopic pregnancy was then made and the patient was hospitalized. An exploratory laparotomy was performed under combined spinal-epidural anesthesia. Medical examination revealed no cervical bleeding, an anteflexed uterus that was slightly increased in volume and of medium consistency, with an irregular shape. During the operation, there were many blood clots in the abdominal cavity. After probing the abdominal cavity, the left fallopian tube was thickened to about 5×1 cm. The diameter of a cyst at the fimbria of the fallopian tube was about 0.5 cm. Histopathological examination was carried out. The pathological results showed that there were a few trophoblasts in the left tubal cavity, which were in accordance with tubal pregnancy and the middle renal duct cyst at the end of the fimbra (Figure 1). The patient was discharged from hospital five days after operation and followed up in outpatient clinic. 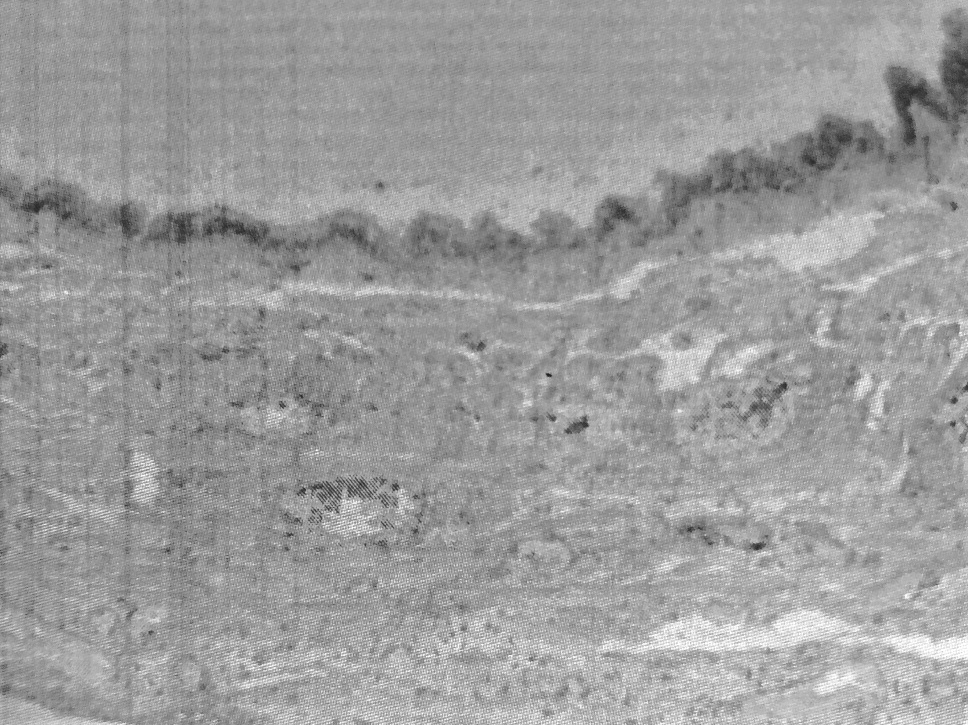 Mesonephric duct cysts are rare in clinical practice, mostly occurring at the reproductive age, and peak period is between 40 and 50 years [2]. It is caused by incomplete residual degeneration of renal duct during embryonic development. The tubules and mesotubules formed testicular ducts, epididymal ducts, and vas deferens in males during embryonic development, and atrophy and degeneration in female renal tubules and mesotubules. In addition to forming a cyst in the cervix and vagina wall between the ovaries and fallopian tubes in adults, it may also form a cyst in the retroperitoneal region near the kidney, behind the colon, near the head of the pancreas or near the tail of the pancreas [3]. Renal duct cysts in the fallopian tube are more rare. Most of the mesonephric duct cysts were less than 2.0 cm in diameter [4], so most of the patients had no typical clinical symptoms, and a few of the larger cysts were accompanied by symptoms of compression. Renal duct cyst occurs in the vagina and is larger, often causing difficulty in sexual life and dysuria [5]. It has been reported that giant mesonephric cyst may cause torsion and acute abdominal pain [6]. Ultrasound plays an important role in the diagnosis of mesonephric cyst, and can be further differentiated by pelvic MRI [7]. Because it has no specific clinical manifestations, so in the work found in the mesangial fallopian tube, near the uterus, vagina, or retroperitoneal or uterine muscle wall of the cystic lesions, in addition to the consideration of Nessler’s cyst, Ectopic cysts, cystic leiomyomas or simple cysts should also be considered for the possibility of mesonephric duct cysts [8]. This can improve the diagnostic rate of the disease. Surgical resection is the main method for the treatment of mesonephric duct cysts. The choice of surgical methods is mainly determined by the location of the cyst and the specific conditions during the operation. Cystectomy was performed clinically for oviducts, ovarian crowns, broad ligaments, and retroperitoneal mesonephric cysts [9]. Cystectomy or hysterectomy may be performed according to the size and location of the cyst in the renal duct of the uterus [10]. It is difficult to deal with the cyst of the vaginal wall in the deeper part of the uterus. During the excision of the cyst, attention should be paid to avoiding the injury of the bladder and adjacent organs such as urethra and rectum [11]. In order to avoid recurrence of cysts, they should be removed as completely as possible and residual cyst tissue should be avoided [12]. In this case, ectopic tubal pregnancy with tubal renal duct cyst, salpingotomy resulted in the patient’s healing after operation and outpatient follow-up did not show abnormality.