Uterine fibroids (UFs) are tumors that originate from the smooth muscle cells of the myometrium. They affect more than 70% of reproductive-age women and 25% of premenopausal patients and are a cause of heavy menstrual bleeding, iron deficiency, pelvic pressure and pain, thereby worsening the quality of life [1,2].

Therapeutic options for UFs include surgical interventions (hysterectomy or myomectomy), so that leiomyomas represent one of the main cause of hospitalization and the most common indication for hysterectomy in the USA, producing a heavy economic impact on healthcare systems [3-6].

The need of uterine-sparing and less invasive therapies, that may improve fertility outcomes [7] and reduce morbidity rate associated with surgery, drove gynecologists to apply for medical treatment as first-line approach. Beside hormonal methods, selective progesterone receptor modulators (SPRMs) represent a new pharmacological option which have been proven to be effective in the interference with the mechanism of tumorigenesis without inducing common GnRH-agonists side effects (hypoestrogenic state associated with significant menopausal symptoms, such as vasomotory symptoms and increased osteoporotic risk) [8].

Specific and reversible histological endometrial effects of UPA in vivo are known [15], and the impact of the drug on the estrogen receptors (ERs), PRs-induced genes, and cellular proliferation rate have been studied in vitro [16]. On the contrary, less clear are the changes induced on UFs elements. Assays revealed that UPA changes the expression of genes involved in the production of extracellular matrix (ECM) proteins [17,18] such as metalloproteinases (MMP) [19] and growth factors [20,21], and influences cellular proliferation index and apoptosis [22]. The pathological pattern of the smooth muscular cells, ECM and vascular grid arranged in fibroids, have not been reported in vivo from a histological point of view.

The aim of this study was the in vivo assessment of the cytological and extracellular matrix histological patterns of uterine leiomyomas, in women who underwent surgery after a preoperative treatment with UPA.

Patients underwent surgical intervention for uterine leiomyomas at the Obstetric and Gynecologic Unit of the Saint Anna University Hospital of Ferrara between January 1, 2017 and March 31, 2018 were screened for previous UPA use cross-linking information from medical chart and from the outpatient gynecological assessments. UPA was administered in-label according to Italian Government indication until the February 19, 2018, when the drug had not to be prescribed in Italy due to the need to collect more information on its side-effects. Prescription criteria of UPA during the recruitment period were the pre-operative therapy with one month or two months drug cycles in pre-menopausal women affected by symptomatic UFs. Five mg/die for one or two therapy cycles of UPA was administered.

After carefully screening of cases of patients underwent surgery for UFs and to whom the UPA was administered, the whole surgical database was screened looking from controls. In the same time frame in which cases were collected, controls were also collected basing on the Internationa Classification of Disease 9 (ICD-9) codes related to leyomiomas (from 218.0 to 218.9) reported in the on-theater surgical registry. As cases were all Caucasian and not menopausal, controls were matched excluding non-Caucasian and non-menopausal patients.

Indication for surgery, as a common policy of this setting, was overall assessed by general clinic interview to check symptoms of UFs, and by gynecological visit and transvaginal ultrasound (TV-US) evaluation. The gynecological US was finalized to record uterine volume, number, size and localization of the three major fibroids, following the Morphological Uterus Sonographic Assessment (MUSA) group criteria [23]. Patients with one or more leiomyomas were enrolled. At least one single leiomyoma of diameter ≥ 3 cm had to be detected, independently from its position, that made the women deserving from conservative (myomectomy) or demolithic (hysterectomy) surgery.

Women who took part in the UPA-sample, underwent regular clinical evaluation at the end of each treatment cycle (13th and 29th week, respectively), which comprehended the interview, the gynecological visit, and the TV-US scan. The evaluation was carried out with particular attention to the histological differences between UFs responder and not responder to UPA intake, assessed with US in term of tumor shrinkage. PEARL IV study [13] and its protocol extension [14] describes a reduction of the UFs volume of at least 38% after the first UPA cycle and of at least 54.1% after the second drug assumption cycle. Patients were classified as responders only if the percentage of shrinkage of the fibroids were more or equal to the 50% of the volume calculated before initiating the therapy.

Tissue samples, composed by leiomyomas, in case of myomectomy, or by the uterus, after hysterectomy, were immediately fixed in formalin overnight and transferred to the Department of Surgical Pathology, Sant’Anna University Hospital of Ferrara. After 24 hours, a macroscopic analysis of the specimens was finalized to primarily assess uterine and fibroids volume and appearance. Then leiomyoma nodules were sectioned into 1 cm-thick slices, embedded in paraffin and Haematossilin & Eosin stained.

The architectural analysis of the nodule was realized with optical microscope at ×2-4 magnification with the aim of describing areas of fibrosis, hyalinosis, edema, and necrosis. Mitosis count, cellularity, phlogosis was assessed at high-power (×40) field magnification. Every pattern was examined following four parameter scale: absence, low, moderate, and high-grade presence. All the pathological analysis were realized by a single pathologist who was blinded from the treatment with UPA.

Statistical analysis was drawn by comparing rates among case and controls of the modalities “absence”, “low”, “moderate”, and “high-grade” for each pathological item (fibrosis, hyalinosis, edema, necrosis, cellularity, mitosis, and phlogosis). Fisher’s test and Mann Whitney’s test was used for univariate comparisons. To best describe the histological pattern of UFs in patients under UPA therapy, a two-dimensional correspondence analysis was built, assessing if UPA administration and other parameters of the fibroids (volume, number) are more related to histological parameters than no administration of UPA. SPSS 16.0 was used for calculations. P value was set at 0.05 for significance.

The Ethical Committee of Ferrara District approved the study. The original idea of the study was to collect data on UFs and UPA in a time frame larger than the one reported above. Because the Government temporary stop to the UPA administration in Italy has been noticed after the Ethical Committee approval, the authors also were forced to stop the study, accepting the risk of the beta error for a small sample size by reporting the results. 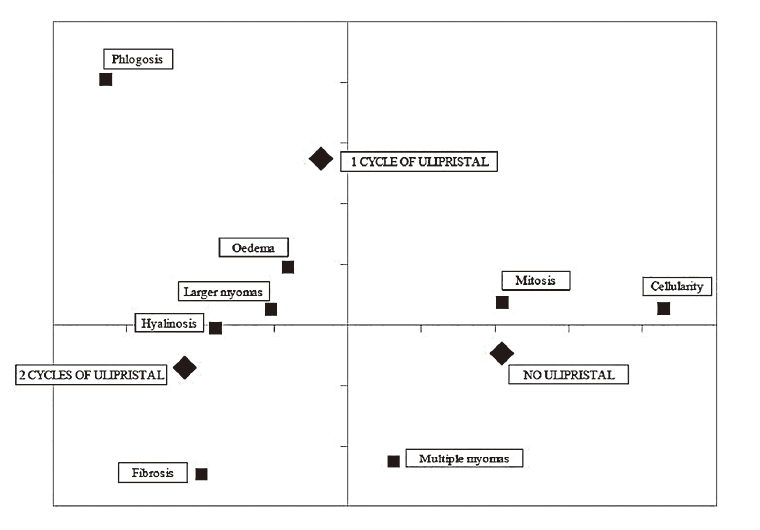 This study reports the characteristics of pathological specimens of leiomyomas under UPA therapy and compares them to specimens of leiomyomas removed from patients who were not under UPA therapy before surgery. Morphological assessment of specimens of leiomyomas, described in a semi-quantitative way by the pathologist, does not result in a typical pattern in this small number of patients under UPA treatment. However, there is an overall trend to reduce cellularity and mithosis, by producing a variable amount of edema, fibrosis, and particularly, hyalinosis. This is what appears after univariate analysis and correspondence analysis. This behaviour can be biased by subjective assessment of the pathologist, despite subjectivity would be able to produce unrealistic differences between the two arms. Additionally, patients underwent surgical operation after UPA treatment would be more likely to be unresponsive to the drug, or they have already planned the surgery after UPA. The mild changes in pathological pattern are in agreement to what already reported by other immunhistochemical studies [17-19,22]. The poor differences found in pathological patterns of leiomyomas found in this study lead us to feel that leiomyomas have an heterogeneous behaviour after UPA administration. Additionally, it seems that administering two cycles of UPA are more likely to produce pathological changes (Figure 1). This interpretation could explain why only one patients has had a reduction of more than 38% in the leiomyoma size and only three patients have had a reduction of more than 50%.

It has been reported that UPA could be an option for avoiding surgical operations if it would be administered for more cycles [24]. Currently, in Italy, UPA cannot be administered for more than one cycle for the risk of hepatic side effects and discontinuously in patients ineligible to surgery. Basing on such indication, it is difficult to hypothesize that UPA could be currently administered to the patients aiming to avoid surgeries. However, if UPA can be proven to be safe in selected patients, it can be proposed that the ideal candidate of a long-lasting therapy should be a patient with a wide volumetric reduction of the leiomyoma after one cycle. Such a policy could avoid unnecessary administration of UPA to all patients with leiomyomas for more cycles.

Histological changes of leiomyomas after UPA therapy is mostly on ECM and, to a lesser extent, to the smooth muscle cells proliferation parameters. However, the effect of the UPA seems heterogeneous, suggesting heterogeneous susceptibility of patients to the drug.