Due to the increase of the cesarean delivery rates globally, several researchers focused their attention on the analyses and monitoring of these rates. According to [1] and [2] that there is no evidence that rate yet peaked. According to [3] and [4] studied short-term and long-term clinical impact on rates. Since 1985, WHO recommended cesarean rate between 5% to 15% in all regions of the world but cesarean delivery rates are unevenly distributed see [1,5,6], [7]. It is a universally established fact that extreme high rates are a risk for bot the mother and the infant. For application of Quality control performance charts vis-e-vis the field of medicine see [8-11]. Traditional graphical form and league tables are used to measure and monitor cesarean rate; however other studies indicated that league tables misleads the obstetricians and public suggested to apply performance control chart to monitor variation [12-14].

According to another study, “Control charts emphasize quality improvement and are less threatening to service providers because they avoid stigmatizing poor performances by moving the emphasis away from the rankings of league tables” [15]. This paper will focus on three statistical tools-clustered bar charts, Shewhart control charts and control charts using repetitive sampling. Clustered bar chart is used as a preliminary visual summary tool to observe the general behavior of the data. The control chart is designed by Shewhart in 1924 for the monitoring of industrial data. The Shewhart control chart is based on average and standard devision of data, but is unable to detect small shifts in the process.

The use of this type of control chart outside the field of medicine is known [16]. The Shewhart control chart is designed to use single sampling. Control charts are efficient than other charts in indicating those hospitals for which obstetric practice should be reviewed [17].

Repetitive sampling is more efficient than single one in terms of sample size [18] and can be applied to monitor healthcare issues. The present authors designed a performance control chart using repetitive sampling as an alternative to league tables in the comparison of cesarean rates among 19 hospitals in Ireland. It is expected that the proposed charts will be more efficient to compare rate than an actual analysis.

The data of cesarean rate was collected from hospital Impatient Enquiry System of Economics and Social Research Institute, Dublin, Ireland. The data was collected from 19 funded national maternity units n = 19,326 (26%) cesarean deliveries from a total of 74,278 deliveries in 2009 which is a fairly large figure hence emerges the raison d’etre for the current research. The data was classified into elective and emergency cesarean delivery cases. An emergency cesarean was defined as one that had not been considered previously and that was required because of an emergency situation (e.g. obstructed labor or fetal distress). An elective cesarean was defined as one that was carried out as a planned procedure before the onset of labor or following the onset of labor when the decision had already been made. The data of 19 hospitals follows the normal distribution. The more details about the data can be read in a study [17]. For simple reference, data is reported in Table 1. 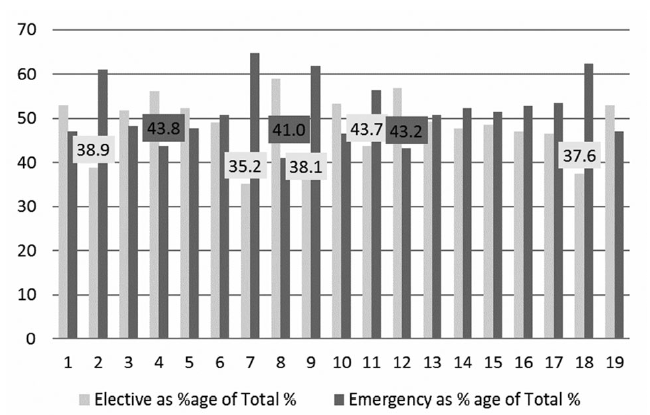 — Cesarean elective and emergency rates expressed as percentages of the total.

Table 2 — Percentage of the total percentage.

Normality Assumption as a prerequisite for applying parametric tests normality of the data must be diagnosed for the said purpose of the Kolmogrov-Smirnov test (KS test), which is generally applied and shown in Figure 2. 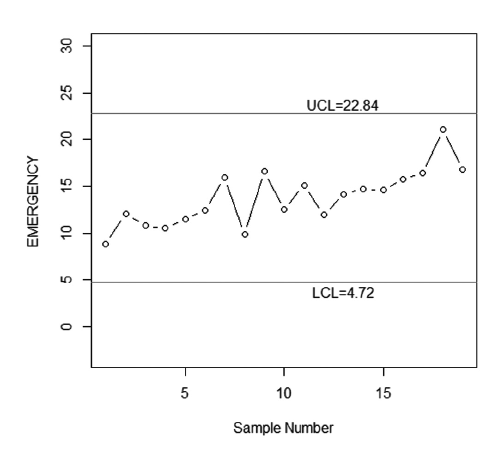 — The proposed control chart for monitoring the elective cesarean rate. — The proposed control chart for monitoring the emergency cesarean rate. — The proposed control chart for monitoring the total cesarean rate.

Application of appropriate statistical tools coupled with correct interpretation is key that comprise a study and render its results trustworthy and applicable in healthcare.

A previous study revealed that only two hospitals were outside the 2σ control limits, but when Shewhart control charts were employed, it specifically pinpointed the area i.e. elective or emergency option and the maternity clinic where review is warranted. Data is not an opinion but if interpreted from the right perspective can become an effective tool for molding or driving public opinion in healthcare.

Results of the current study will be beneficial to mothers, babys, fathers, hospital administration, and last but not, least the community at large.

It was observed that numerical figures provide a cursory probe but as the Clustered Bar charts and Shewhart control charts were incorporated, a more meaningful situation has emerged. Continuous monitoring of the pre-labor obstetric practices will not only enhance the quality of service in the maternity clinics, but will also encourage the medical staff for periodic reviewing of the said practices.

In future, data collection should also assess the educational, social economic condition, and rural-urban background of the patients. It is recommended that the results from the present and the ongoing research may always be looked into, along with the league tables in order to have a meaningful insight into the issue of pre-labor obstetric practices.

This article was funded by the Deanship of Scientific Research (DSR) at King Abdulaziz University, Jeddah. The author, Muhammad Aslam, therefore, acknowledgea with thanks, DSR technical and financial support.

— Cesarean elective and emergency rates expressed as percentages of the total.